Please Do Not Feed the Weirdo

Escape from Shudder Mansion is the fifth book in the Goosebumps SlappyWorld book series.

The cover art shows a mysterious creature attempting to break through a barricaded door in a mansion.

Riley Shiner is obsessed with Escape from Shudder Mansion, a video game that is based on a really spooky house in his neighborhood. He's played it so much he knows it by heart, which is why he won't go anywhere near the actual place—it's just too dangerous. There are shadows that creep around inside. And then there's the level Riley can't ever beat. It features the worst creature of all! Riley is about to find out that you don't always play this game. Sometimes it plays you!

Riley Shiner lives near a creepy legendary haunted mansion so well known that it inspired a video game called Escape From Shudder Mansion. He's a big fan of the game but is scared of the house itself, and doesn't like walking by it. While walking by it with his sister twin sister Scarlet, he sees a shadowy snake creature but it vanishes. He then sees a mysterious girl named Mia, who says she moved in nearby a couple of weeks ago.

Suddenly, he starts to see through her and sees her skull, but when he looks back at her, she's back to normal. Scarlet invites Mia over for dinner, and while they are chatting, Riley plays the game to relax. He sees Mia in the game but when he calls Scarlet and Mia over to see it, they just think it merely looks a little like Mia. The next day in class, Riley's teacher Mrs. Blume gives the students the assignment to "have an adventure', and record it.

She suggests that Riley and his group spend the night in Shudder Mansion, which he isn't keen on. Especially since one of his group members is a boastful kid named Carter, who Riley hates. On the way home, his group decides to peek into the house to get a taste of their upcoming adventure. They can't get the door open, and they leave when they see a police officer coming. Riley goes back to take some pictures for their report and notices that the doors are open now. He goes inside to get a quick peek, but quickly gets turned around and bumps into The Dancing Skeleton.

Riley runs outside and bumps into Scarlet, who got worried when he didn't follow her and came back to look for him. Because he was knocked out and woke up inside, he assumes it was all a dream until he sees he is gripping two tiny finger bones. A few nights later, the kids arrive at Shudder Mansion along with their parents. Scarlet has invited Mia along, which makes Riley nervous. They go upstairs to look for spirits and find a mouse monster.

Riley remembers that the most deadly monster in the mansion, The Beast, is bound to come soon. They run to the kitchen but get caught in a sticky trap set by The Beast. Riley recalls this trap from the game and knows that they have to take off their shoes because the goo can't stick to human skin, so they can walk through it fine. This works but they see that Scarlet has vanished. They go down to tell their parents, but they have all run away from the mansion and its horrors. The kids try to follow them but discover that the door is locked.

Riley remembers that there are a few other exits but before they can check any of them, Mia vanishes. They press on to find her and head into the basement. They find Scarlet tied up and then three shadowy figures appear and then shift into their human forms. One of them is Mia. The other figures are her parents, one of them is The Beast and the other is named Margo. They joke that the kids will star in the game's sequel, Death at Shudder Mansion and say that The Beast must be fed.

Riley remembers there is something in the basement that can help them but they must distract The Beast. Riley plans to use a cup full of spiders from the game, but it's empty so he just smashes the cup over The Beast's head. This gives him time to find what he was looking for: A reset button. He hopes it will take them to the start of the night so they can leave.

He presses it and it works, taking him back to when the kids arrived at Shudder Mansion. But he loses his memory of the night, meaning he will have to face the horrors all over again. 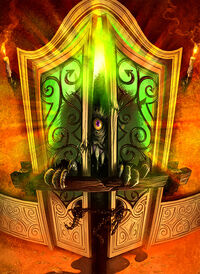 Retrieved from "https://goosebumps.fandom.com/wiki/Escape_from_Shudder_Mansion?oldid=124639"
Community content is available under CC-BY-SA unless otherwise noted.