Escape from Camp Run-For-Your-Life is the nineteenth book in the Give Yourself Goosebumps gamebook series. It was published in 1997.

The cover shows three zombies sitting around a campfire in a forest, with a pink sky in the background. A camp counselor is in the middle with two zombie children on either side of him. He is holding a stick, that has spiders and worms skewered on it, while the other two hold sticks of rats and bugs over the campfire.

On Your Mark. Get Set. Scream!

Heads up! You're on your way to sports camp! If only Uncle Ed can find the place. He’s the lamest driver ever. A sign up ahead says CAMP RUNNING LEAF. Hey! That's not the name of the camp you signed up for! But Uncle Ed is already driving away. Oh, well. Running Leaf is a sports camp too. Isn't that why the campers call it Camp Run-For-Your-Life?

You've got a choice of events. If you enter the athletic competition called the "Selection," you could be selected for a free trip... to be a slave on Plant Xentron! Yikes. Maybe you'd better choose the wilderness hike instead. Just look out for that mountain lion over there! Oh and try to steer clear of the Zombies with rotting limbs...

You are due to attend a sports camp called Camp Pendleton. Your Uncle Ed is to drive you there, but gets lost and has to ask for directions. You end up at a camp called Camp Running Leaf (which, the head coach claims, is Camp Pendleton under a new name) and have to choose which of two activities to take part in: a hiking excursion or a sports tournament called "The Selection".

You go on the hiking trip but are alarmed to discover that Kim, a shallow girl you really don't like from your school, is also at the camp and coming on the trip. Coach Krump divides the campers into pairs, and you get stuck with Kim. Each pair has to hike up Zombie Mountain and bring back a bone as proof they were there, with a prize given to the first to return. Coach Krump warns you to beware of zombies, and you think it's a joke; but it isn't. You then have to escape from the zombies while finding a way to complete the challenge.

You go to breakfast before The Selection and are surprised to see blue eggs being served. You don't want to risk eating the eggs, so you hide them in your napkin; but you notice that your fellow campers who ate them are acting strangely and seem to be on auto-pilot. You head off to The Selection, where all the events turn out to be deadly: swimming in an alligator-infested lake, jumping over blades and more. You need to win The Selection and get the prize of a mountain bike, so that you can escape from the camp. But you're neck and neck with a bully called Brad, the only other person who hasn't eaten the eggs.

From story B, rather than hide the eggs in your napkin, you start a food fight with them. Coach Rex decides you need to learn about "teamwork" and rather than letting you take part in The Selection, he makes you play some team sports. There are no good endings to this side story.

There are eighteen bad endings and five good endings.

Book advertisement from The Curse of Camp Cold Lake.
Add a photo to this gallery 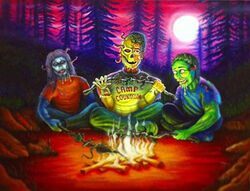 Retrieved from "https://goosebumps.fandom.com/wiki/Escape_from_Camp_Run-For-Your-Life?oldid=124737"
Community content is available under CC-BY-SA unless otherwise noted.