The King of Horror

Black
Emory Banyon is a character in the fifteenth Goosebumps Series 2000 book, Scream School. He is the father of Jake Banyon.

Known by many as "The King of Horror", Emory Banyon is a film director, famous for his Scream School series of horror films. Beyond his career in movies, Emory is also a dad, though he's far from the fatherly type. He's obsessed with making his son, Jake, afraid, often through cruel tricks. Emory tries to teach Jake that it's natural to feel fear, but Jake denies being scared of his pranks, as well as his films.

To see if his son is as brave as he says, Emory plans to scare Jake on his birthday. When the day arrives, Jake is led to an abandoned movie studio, where two actors dressed as ghouls pop out to scare him. However, things don't go according to plan and Jake ends up in tears, humiliated in front of everyone.

To get payback, Jake decides to sabotage the filming of his next Scream School film. He hires the cast to make it look as if the set is haunted. When Emory tries to film, strange things seem to happen. Before long, even Emory is scared. When Jake reveals it was all an elaborate joke, Emory is proud. However, when reviewing the footage, he sees none of the crew showed up on film. Emory then runs off in terror.

Emory seems to be kind, but fails to take his son's feelings into consideration. While his pranks are mostly good-intentioned, his actions are still cruel. Emory has his odd quirks beyond this, such as the fact that he wants everyone, even Jake, to call him by his first name. This is because he feels the two should be more like friends, rather than father and son.

The book describes Emory as having wild black hair that he never brushes, as well as bushy black eyebrows. 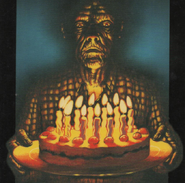 One of Emory Banyon's actors as depicted on the French translation of Scream School.
Community content is available under CC-BY-SA unless otherwise noted.
Advertisement