Ellie is the main antagonist of the Valentine's at Poison Lake event in Goosebumps HorrorTown.

Ellie arrived in HorrorTown around Valentine's Day, after the town had received a new airport. She acted like she was a friendly German florist, showing off her beautiful flowers. However, she was revealed to actually be a succubus, who brought some succubi friends to scare the townsfolk. In order to distract everyone while she prepared her plan, she spiked the town's new lake with a potion that forced people to fall madly in love with each other.

While she was preparing things, Mrs. Dark caught her turning her into a demon. However, she was not upset as she is also secretly a monster and revealed this to Ellie. She also admitted that she has had feelings for Ellie ever since she arrived. Ellie shared these feelings and the two fell in love, starting to go on scares together. It was assumed that their love was caused by the potion, but they after they had taken an antidote that a boy named Eric created, they were still in love. The antidote was given to everyone else, putting a stop to her plans.

Sometime later, Ellie ran for mayor alongside Countess Yvonne, following the arrest of Mayor Johnson. She and the other candidates ended up competing in a big game of Be Afraid to become ruler of HorrorTown, but eventually Slappy the Dummy won.

Ellie pretended to be a friendly neighbor to the citizens of HorrorTown, when in reality she is an evil monster. Despite that, she got along very well with Mrs. Dark and came to fall in love with her, while still going on epic scares.

In her human form, she is a blonde German woman with blue eyes. 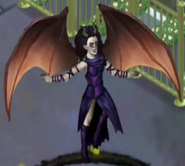