Goosebumps Wiki
Register
Don't have an account?
Sign In
Advertisement
in: Books, Give Yourself Goosebumps, Books Released In 1999,
and 15 more

It Came from the Internet

Hocus-Pocus Horror
Elevator to Nowhere is the thirty-fourth book in the Give Yourself Goosebumps gamebook series. It was published in 1999.

The cover illustration depicts Uncle Darius trapped in an elevator with the indicator flashing "6." He seems to be desperately trying to force the doors open in an attempt to escape.

GOING UP...AND OUT OF THIS WORLD!

Meet Uncle Darius. He's an inventor — and your ticket to an A on your science project. The trouble is he's a little wacky. Okay a lot wacky! Right now he's testing out his Transuniversal Transvator. It looks like an elevator. But it takes passengers to other universes! Uncle Darius says he'll prove it by bringing back a special souvenir — a shrunken head.

But when Uncle Darius returns, something is wrong. How wrong? He wants to shrink your head! And your only means of escape is battling this headhunter on Earth — or battling the unknown in another universe. Hurry, the doors are closing!

You have to do a science project with a girl named Jamie, who you have been paired with. Jamie's uncle happens to be an inventor, which makes you think this project will be much easier now! Jamie does however warn you that Uncle Darius happens to be "Extremely extreme". That means, it is best to not let him demonstrate his inventions, since they hardly ever work the way they are supposed to.

Upon arrival, you see how run down the house is. It looks like nobody has lived there in a very long time! But the two of you just think that maybe Uncle Darius just does not have the time to deal with such things and the two of you go inside. A pair of hands suddenly grab you! But it turns out to just be Uncle Darius and he brings you and Jamie into the lab, where he announces he is going to be testing one of his inventions. Which you think just looks like a typical elevator. Uncle Darius explains that it does not take you to different floors, but to different universes instead!

You decide to humor Darius, finding this hard to believe as he explains that all of the universes are the same but with one deadly difference. He then steps into the elevator and returns moments later, only to produce a box... with your head in it! He then begins to approach both you and Jamie while wielding a machete! As the both of you do, Jamie explains that it can't be the same Uncle and she remembers that once the real Uncle Darius told her of a universe where Head Hunting was a casual sport!

You begin to panic, realizing that the other you has already died in this universe, but he must be trapped in it and you're trapped in the house! The controls are somewhere in the lab, where the evil Darius is. Jamie then suggest that you and her travel to this other universe to try to find her Uncle. But you do not really know if you want to do this, until realizing that saving the real Darius may be your only chance at stopping the evil one!

You decide to use the Transvator to journey into the Head-Hunting universe to save the real uncle Darius. You and Jamie manage to safely make it to the Transvator and narrowly escape from Evil Darius. Jamie tells you to press a button and you do not have too long before the evil Darius opens the door! You must then choose which button to pick, all leading to a different universe until you find the right one.

You decide it is much safer to stay in your own universe and use one of the real Uncle Darius' inventions to help save the two of you from Evil Darius and force him to save Good Darius. However, this is not going to be easy! You barely have any idea what the inventions do and Jamie can only help with what she does know.

There are twenty-one bad endings and two good endings. 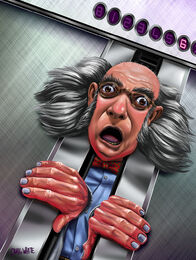 On his website, Craig White released a detailed description of his artistic process for this cover, including numerous work-in-progress images. However, White's website wasn't properly archived; large portions of the process ⁠(including all its images) are currently lost.[1] According to some of the surviving information, White was asked to make "moderate revisions" to the initial sketch, with Scholastic requesting that more of the elevator be visible.[1] The man also originally had a yellow tie, but this was changed to red and green to be less distracting.[2] Reportedly, the creation process took "about 2 1/2 days including about 2 hours for pencils" and was "faster than most" to complete.[2]

In an interview, White stated that the man on the cover of this book was inspired by Emmett Brown from the film Back to the Future.[3] He admitted that this cover was one of his least favorite in the series in the same interview.[3]