Black
The Egg Monsters are a group of aliens originating from Mars that appeared in the forty-second Goosebumps book, Egg Monsters from Mars. The eggs arrived on Earth during a meteor shower that only hit the protagonist's town.

Dana Johnson finds a strange, large, pale green egg near his house. It does not break when it is thrown. About a day later, the huge green egg hatches and out comes an "egg monster" that resembles a pile of rotten scrambled eggs with eyes.

Dana eventually brings the creature to Dr. Gray's lab. Dr. Gray explains that the eggs came down from Mars in a shower that only hit the town. Dana's egg was the last one.

Dr. Gray locks both Dana and the egg creature in a room with frigid temperatures, and the room contains many more egg creatures. After a few hours, the egg creatures merge together to form a blanket for Dana so he does not freeze to death. Eventually, Dr. Gray lets Dana out, but he is furious that the egg monsters turned into a blanket. He plans to put Dana back in the frigid room to freeze. Suddenly, the creatures overpower Dr. Gray and Dana gets out of the room and runs back home.

The next morning, Dana seems to be fine and begins to go to his friend Anne's house. Suddenly, he crouches on the lawn and lays an enormous egg.

The Egg Monsters have the ability to communicate through synchronized swarming. They are sentient enough to understand other languages even though they do not speak throughout the story.

Based on the end of the book, the Egg Monsters can reproduce with other species. However, the exact reproductive method is unknown, as Dana had no idea he was impregnated by them until the very end of the book.

The Egg Monsters are described as resembling a runny pile of rotten scrambled eggs with eyes and small green veins. 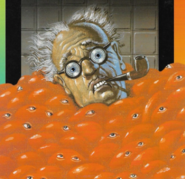