Not to be confused with Edward "Eddie" Morgan from A Night in Terror Tower or Eddie from Bride of the Living Dummy.

Eddie is the protagonist of the fifteenth book in the Goosebumps series, You Can't Scare Me!, and its television adaptation.

Eddie despises Courtney. In his eyes, Courtney is a showoff and too perfect. Eddie and his friends continuously try to scare her.

The next day at school, Eddie learns that Courtney is a firm believer in the Loch Ness Monster, Bigfoot, and other monsters. From this Eddie begins formulating a plan to scare Courtney. When Eddie goes home, he asks his brother, Kevin, if he and his friends could dress up as Mud Monsters and scare Courtney; according to local legends, Mud Monsters are vengeful humanoids that live in the woods. After some bargaining, Kevin agrees. Molly, one of Eddie's friends, also says that she can help lure Courtney out to the woods at night.

On the night that Kevin is scheduled to appear, Eddie and his friends go to the woods. Eddie and two of his friends hide while Molly talks to Courtney. Eddie notices three frightening Mud Monsters staggering towards the girls, but they don't seem to notice. Eddie is shocked when he sees three more Mud Monsters approaching from behind him. He recognizes one of these to be his brother. Kevin apologizes for being late, but Eddie is immediately confused. He wonders who the other Mud Monsters are. All of the kids begin screaming and run away.

The story jumps forward two weeks. Courtney brags to everyone about how she got to see real Mud Monsters! Eddie admits that he and his friends can't scare Courtney because they aren't brave enough.

Eddie is, at times, mean-spirited. He hates Courtney simply because of how perfect she seems. As such, some of his fantasies of scaring her border on violent, including siccing dogs on her.

In the book, Eddie has red hair, freckles, and buck-teeth. In the episode, Eddie has slightly tanned skin and short, black (or very dark brown) hair. 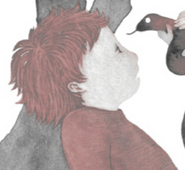 Eddie as depicted in the Korean translation of You Can't Scare Me!.