Earth Geeks Must Go! is the twenty-fourth book in the Goosebumps Series 2000 book series. It was published in 1999.

The cover artwork shows a spaceship heading to Earth.

He hears someone following him, and suddenly is swarmed by bugs that attach themselves to his skin. He runs, and finds his pursuer, the girl from the cafeteria who introduces herself as Arlene. She appears to be normal like him. The two discover that they remember nothing about their lives apart from their first names, and then are attacked again by the bugs. They are rescued by students who whistle at a high pitch that hurts the bugs, which the students call Splatters. The students say that entering the woods is an offense, and take Jacob and Arlene to the principal. Bluffing their way out of punishment, Jacob exits the school to free a stray Splatter, and sees a dirty looking man who beckons to him. He goes back inside and finishes the school day. Jacob and Arlene go to a library after school, in the hope of finding some information about this world. To their horror, the writing in the books is in the strange foreign language they saw before. They leave, and spot the man from before who seems to be following them. They hide from him in an empty house, which seems strangely familiar to them. In the hope of learning something, they switch on the television, where they flick through a number of stange shows until they stop on a news program.

The news anchor announcer that "Earth Geeks" have landed, and they will not survive for long if people are alert. Jacob and Arlene believe themselves to be the "Earth Geeks." They begin to search the house for clues, until the strange man enters the house and finds the two. He claims that Arlene and Jacob are brother and sister, and he is their father. He claims that he and they are in terrible danger, but must bluff their way through another day of school. Their bluff fails when they don't know how to play a simple game, revealing themselves to be the Earth Geeks to the student body. The two are sent once again to the principal, who tests them on general knowledge. Failing their tests, the principal makes a phone call to reveal their identities to the mayor-govenor, but Jacob and Arlene escape the office. Soon reunited with their father, they try to drive away but the strange car they find proves impossible to drive, and they crash into a brick wall.

They awaken in a cage, and are dragged to the mayor-govenor's office. There, they are hung over a cauldron of Splatters, and are told to reveal why they came to this world. As they cannot answer, they are lowered into the pot of Splatters, when suddenly the Splatters begin speaking to them telepathically. The Splatters promise not to hurt them, and then tilt the cauldron to cause a tsunami of Splatters that drives the mayor-govenor and his guards out of the office. A Splatter named Grolff explains that the Splatters have been killed for amusement daily by these people, even when their intelligence is far surperior. They wish to seek revenge, and it is revealed that they were the ones who brought the humans from Earth, so they can hide a bomb on them where their enemies would never look. Grolff commands them to give him the bomb which has been planted in his father's wristwatch. His father hands it to Jacob, and Jacob smashes the watch on the wall, making it emit a high-pitched squeal, killing the Splatters.

Jacob claims that when Grolff communicated with him, he could suddenly hear Grolff's thoughts as well, revealing evil intentions to kill them as well. The mayor-govenor returns and declares the family heroes, and hosts a celebration party that lasts for days. The people of this planet had actually suffered under the wrath of the Splatters for years, and now they are finally free. But when Jacob questions if he and his family can travel back to Earth, they find that their only option is a spaceship built by an eccentric inventor nicknamed "Crazy Old Phil." The rocket takes them to a planet that seems like Earth, but when they arrive, they witness two citizens removing their heads and lizard heads poke up from their necks. It seems like they're not quite home yet. 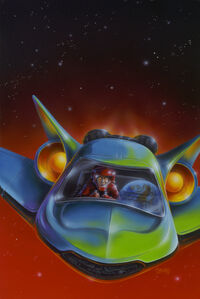 Retrieved from "https://goosebumps.fandom.com/wiki/Earth_Geeks_Must_Go!?oldid=124850"
Community content is available under CC-BY-SA unless otherwise noted.