Goosebumps Wiki
Register
Don't have an account?
Sign In
in: Books, Goosebumps Most Wanted, Sequels,
and 14 more

Creature Teacher: The Final Exam
Dr. Maniac Will See You Now is the fifth book in the Goosebumps Most Wanted book series. It was published in 2013.

This book is a sequel to the Goosebumps HorrorLand book Dr. Maniac vs. Robby Schwartz. It is also heavily influenced by the twenty-fifth Goosebumps book, Attack of the Mutant.

The cover illustration depicts Dr. Maniac holding a poster of himself.

Richard Dreezer loves reading comic books. He spends a lot of his time at the Comic Book Museum in his neighborhood. He even dreams of being a superhero with strange and amazing powers. But when the insanely devious Dr. Maniac appears in the real world, Richard has his hands full. If Richard doesn't do something fast, everything he knows will be destroyed. But how do you reason with a Maniac? Richard better figure it out fast because the doctor is now in...sane.

Richard “Sneezer” Dreezer is a 12-year-old boy who has very bad allergic reactions, which make him sneeze a lot. During class, Mrs. Callus, Richard's teacher, calls on him to give his book report. Richard goes to the front of the class, and starts his report, but, as soon as he begins, he starts to feel a big sneeze welling up. Sadly he can't turn around in time, so he sneezes all over a girl in the front row. Everyone in the class burst out laughing, and they make fun of Richard. Mrs. Callus tries to stop the laughter, but Richard accidentally sneezes all over her, too.

Later, Richard's parents send him to an allergy doctor named Dr. Root who has an office right in front of the Comic Book Museum. Richard enters the building and finds Dr. Root in his office, waiting for him. Dr. Root says that he is only giving Richard one shot, but the needle he will use is two feet long. Richard faints but otherwise he feels fine.

Later he visits the Comic Book Museum. There, he finds his friend and curator of the museum, the Big Kahuna. Kahuna gives Richard two old comic books from the series The Masked Monkey. Richard goes to the reading room, but when he returns, Kahuna isn't there. Instead of Kahuna, there's a strange and tall man who doesn't have pupils in his eyes. That evening, Bree, Richard's crush, heads over to his place. Bree and Richard start planning their report on the Comic Book Museum.

The next morning, Richard and his little brother Ernie head to school. Richard spots two comic book characters, Captain Croaker and Terry Tadpole, disappear behind a roof. After school, Richard goes to the museum to meet Bree. Richard looks for Kahuna, but he isn't there. Instead, there is the SnakeMan, another comic book character. The SnakeMan tells Richard that he has to leave because the museum is closed. The SnakeMan leaves the museum, grabs a rope that suddenly appeared in the air, and he escapes. Richard is still thinking about what happened when he sees his brother followed by Bree. Bree says she brought Ernie as a surprise. Richard starts talking about what he saw on the way to school, but he sees Dr. Maniac across the museum hall. Richard tells Dr. Maniac that he isn't real because he's just a comic book character. Dr. Maniac doesn't believe him, so he tells Richard to eat a cockroach to test to see if it's real or not. Richard refuses, so Dr. Maniac eats the insect himself.

Bree attempts to leave the museum, but the Purple Rage appears and blocks her path. He is about to destroy Richard, but then Bree grabs Rage's arm and tells him she's a kid and not a comic book characters like he is. Dr. Maniac is interrupted by a superhero called the Star Spangled Banner, and the kids escape while they are fighting. Dr. Maniac follows them and tells them that someone broke the wall between the Real World and the Comic Book World, and, because of that, comic book characters are escaping into the Real World. Dr. Maniac also reveals that he plans to torture the kids in front of TV cameras to show it to everyone.

Richard has an idea. He stands up and starts to tickle Dr. Maniac under the chin. Dr. Maniac giggles and laughs helplessly as Richard tickles him, and the kids escape. When they go outside, the street is filled with super heroes and villains. They run into Richard's house, looking for his parents, but they were locked in cages by Captain Croaker. Croaker grabs Bree with his tongue.

Richard picks up Ernie's collection of dead flies and shows it to Croaker hoping that he will eat the flies and let go of Bree. Sadly, the plan doesn't work. Richard sneezes and the jar falls, spilling the dead flies all over the floor. Terry Tadpole, Croaker's sidekick dives across the carpet and starts eating the flies. The kids run out of the house, only to find Purple Rage even angrier than before. Rage forces the kids to go back to the museum in order to convince Dr. Maniac to do things right again.

When they reach the museum, they see Dr. Maniac holding Ernie in both hands. But when Richard approaches Maniac, he and Ernie both disappear suddenly. They notice a trapdoor hidden behind the desk, and they fall through and into the Comic Book World. They land in an ocean, and they are swallowed by a giant whale. Inside the whale, Purple Rage becomes so angry, he explodes, freeing the kids. The kids land on a beach. Bree's leg falls off, which they assume is because comic book world follows different logic to the real world.

They come across a doctor's office where the woman at the desk is a comic book character named Scarlet Starlet. She asks them if they have an appointment with the doctor. It turns out that the doctor the Starlet is referring to is Dr. Maniac. He says that he wants the kids to be his guests in the Comic Book World forever, and he wants them to be his slaves. Suddenly, the Purple Rage appears, and he explains that he pulled himself together. Richard is relieved that he arrived because he could free them from Dr. Maniac.

Rage says that he is a villain, and villains don't battle villains, so he is taking Dr. Maniac's side. It suddenly hits Richard that they're in the Comic Book World, so they can have superpowers. Richard tries to fly, but he falls to the ground and makes the two villains laugh.

Suddenly, Dr. Root appears. He reveals that when given the shot, Richard fainted, so everything happening is part of Richard's dream. Dr. Root picks another two feet needle to wake Richard up. Richard asks Bree to pinch him, and, when she does it, it hurts. This signals that Dr. Root is lying. Dr. Root reveals that he was the one who opened the door between the two worlds, and he is a comic book character that managed to escape to the Real World. Root says that he and Maniac are "maniac partners."

Root raises the needle again, but Richard sneezes. The power of the sneeze makes Dr. Root's needle fly into the air and fall on the ground. Richard sneezes again, and the sneeze sends Dr. Root slamming backward into the wall, causing him to faint. Richard realizes that his sneezes are like explosions in the Comic Book World, so he uses them to defeat Dr. Maniac, the Purple Rage and Scarlet Starlet. When he goes outside, Bree and Ernie are not there anymore. Instead of them, dozens and dozens of superheroes fill the streets of the Comic Book World. Richard is told by a character named The Mighty Hairball that the door to the Real World is open, but it's closing quickly. He also says that the door is at the top of a concrete stairway across the street.

Richard starts running toward the stairway, but then The Masked Monkey stops him. Richard sneezes, and the monkey's mask blow off his face. Without his mask, the Masked Monkey is just a regular monkey. When Richard reaches the door, it is closed, but, with a powerful sneeze, he is able to open the door. In the Real World, Richard sees his parents arguing, which is a typical occurrence for them. When they spot Richard, they tell him he is grounded for life. He sees Bree waving a fist at him, and she says that she will get her revenge. 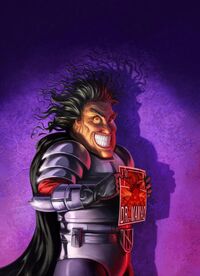