Goosebumps Wiki
Register
Don't have an account?
Sign In
Advertisement
in: Monsters, Villains in Goosebumps HorrorLand (series), Villains,
and 13 more

Dr. Maniac, a comic book villain, was imagined up by illustrator Robby Schwartz, but — for unexplained reasons — Dr. Maniac managed to escape into the real world. Dr. Maniac has the power to make things explode, fly, cool, heat, and jump in and out of cyberspace. He can also make fire by rubbing his fingers together, a trick taught to him by The Scorch.

Dr. Maniac really lives up to his name, being The Totally Mental Maniac of Mayhem. He is greatly insane and he often thinks he is funny, having a tendency to say the most ridiculous things he could think of. He is a sworn enemy of The Purple Rage and he does know how to defeat The Rage, considering The Rage really takes his anger too far. But there has been some occasions when Dr. Maniac worked with The Purple Rage, which usually ended when The Rage grew a fit. Dr. Maniac has a good relationship with Scarlet Starlet, as she often joined in with him on some of his plans. Dr. Maniac can also get worried if things went out of control that could lead to disaster, such as when the other supervillains escaped into the real world, making it the end of the world. And he would help to try to fix the problem before it could get any worse. Dr. Maniac knows that he is a comic villain and he always chooses to go wherever he can in both the comic and real worlds. Whenever someone tells Dr. Maniac that he is crazy, he would react by screaming "I'm not crazy. I'm a MANIAC!" This is also his catchphrase.

Dr. Maniac is a big man with crazy black hair and a maniacal expression. He wears silvery armor over blue and green tights, a leopard-skin cape, and tall white boots covered in yellow feathers. ''They Call Me the Night Howler'' reveals he has one brown one and one blue eye. 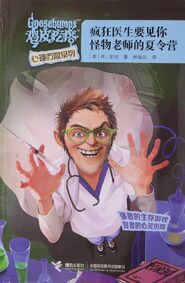 Dr. Maniac as depicted on the Chinese cover
Community content is available under CC-BY-SA unless otherwise noted.
Advertisement