Judah Katz
Dr. Brewer's Clone is the main antagonist in the second Goosebumps book, Stay Out of the Basement, and its television adaptation.

Dr. Michael Brewer, a botanist, was working on a super plant, trying to electronically make a new plant using DNA elements from other plants. While he was working on it, Dr. Brewer accidentally cut his hand on a slide. Then Dr. Brewer turned on his machine, not realizing until he did so that some of his blood had mixed in with some of the plant molecules he was using. The machine also mixed his human molecules with the plant molecules too, therefore creating something that was part human, part plant. Dr. Brewer was intrigued by this creature, and sought to create more. One day, Dr. Brewer went too far and created a plant that was an exact copy of him in almost every way. The clone looked human but he still had some plant flaws, making him imperfect. Despite these flaws, the clone gained the upper hand somehow, and encased the original Dr. Brewer within the basement closet to contain him whilst he continued his work.

The clone had spent many days in the basement working on the experiments while his original was shut in the basement closet. He had forbidden everyone else in the original's family from going into the basement, in order to keep up his façade. He maintained a nonchalant mood around those that he interacted with. This caused some great concern for the family, mainly his original's children, Margaret and Casey as his original was much closer to them. They were beginning to think that Dr. Brewer was trying to prove to the people at PolyTech, whom he had been working with that they were wrong to fire him for what he was doing. One day, Margaret and Casey came into the basement to see what their "father" was doing and he shouted at them to stay out of there, frightening them.

A week later, Mrs. Brewer was going to see her sick sister, so the clone had to drive her to the airport and was later asked by their neighbor for some help when he returned to the house. When he got back to the house, he found Margaret and Casey in the basement and calmly but crossly scolded them that they were told to stay out of it. Margaret and Casey asked him what he was doing in there, to which he replied that he will explain later.

Later on, the clone started to show some of his plant-like tendencies. First, he was devouring plant food in the kitchen. Then Casey knocked over a Dodgers cap he was wearing, exposing some leaves sprouting from his head when he was "explaining" to Margaret and Casey what he was doing. Then one night he was in the bathroom bleeding green blood. He didn't realize that Margaret had been spying on him when he was eating the plant food and bleeding blood and she also saw some worm-filled dirt in his bed when she was going to confront him. Later, he made a very unusual and unpleasant-looking lunch for the two kids and tried to persuade them to eat it when the doorbell rang, revealing to be his original's boss, Mr. Martinez. The clone led him to the basement, but fearing his secret will be exposed, he bound and gagged Mr. Martinez and shut him in the closet with his original, but not before stripping him of his clothes. He found that Margaret and Casey had once again been in the basement and they asked him what had happened to Mr. Martinez as they had found his jacket, to which the clone lied that Mr. Martinez had gotten hot and uncomfortable so he took it off and must have been in a state of shock when he left it there. The clone then told the two kids not to go back in the basement as it is dangerous and they would be very sorry.

Later on Saturday, the clone went to the airport to pick up the children's mother, who was back from visiting her sister. They returned home and the clone found Margaret and Casey in the basement again and that they had freed their real father, to which he was most astounded at. He and his original argued about who the impostor was, putting Margaret, Casey and their horrified mother in the middle. Margaret then grabbed the ax from the hatless Dr. Brewer's hands and told both of them to stay back. The clone was relieved and ordered Margaret to hand the ax over to him. Margaret was hesitant until her father from the closet called her Princess, a nickname that the clone had never used. Then Margaret remembered seeing the clone bleeding green blood and with Casey's help, she punctured her father's arm and found red blood, revealing him to be their real father, much to the clone's horror. Immediately after, Dr. Brewer killed his clone by cutting him in half with the axe.

The clone had his original's physical appearance, but was actually a stem, having no bones or any human organs. He often wore a Dodgers cap to cover the leaves on his head.

Dr Brewer's clone was fixated on continuing the original Dr. Brewer's research. He is much more reserved and aggressive than the original; he is especially angered by the attempts of Margaret and Casey to go down into the basement. Despite his human appearance, he was still a plant on the inside as proven by his plant tendencies, such as eating plant food and bleeding green blood. He seemed to be highly intelligent and invested in his work. 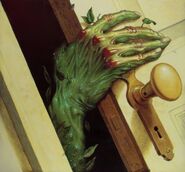 The Plant Clone's hand as depicted on the original artwork for Stay out of the Basement.

The Plant Clone's hand as depicted on the Classic Goosebumps artwork for Stay Out of the Basement.

Dr. Brewer's Clone as depicted on the UK cover of Stay Out of Basement. 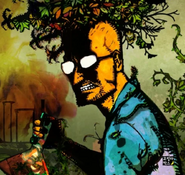 Dr. Brewer's Clone as depicted on the Korean cover of Stay Out of Basement.

Dr. Brewer's Clone as depicted on the Japanese cover of Stay Out of Basement. 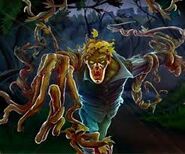 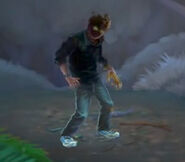 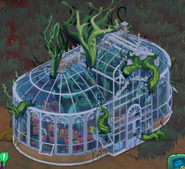