Goosebumps Wiki
Register
Don't have an account?
Sign In
in: Books, Hall of Horrors, Schools,
and 7 more

Why I Quit Zombie School

The Birthday Party of No Return!
Don't Scream! is the fifth book in the Goosebumps Hall of Horrors book series. It was published in 2012.

Jack Harmon can't think of anything worse than getting picked on by the bullies at school, until he discovers an even bigger threat. When he finds a cell phone on the bus home, Jack hears a strange voice on the other end. Whoever it is wants Jack to do things—bad things. Jack keeps trying to make his new "friend" happy. But everyone thinks Jack has lost his mind. How can he overcome something that he can't see but is everywhere?

Jack Harmon is constantly getting bullied on the bus by Mick Owens and Darryl Olivial, and there's nothing he can do about it. After a rough encounter with the bullies, Jack is left alone, only to spots a phone on the seat next to him. He studies the phone for a while, finding that it's already loaded with apps. Jack raises the phone to his ear and hears a girl's voice. The girl greets him, telling Jack she's his new best friend. Jack tells her that she's got the wrong number. She replies by telling him that if it really is a wrong number, she wouldn't have known his name. She warns Jack not to make her angry.

Jack tosses the phone onto the seat next to him and leaves as soon as it's his stop. As the bus begins to pull away, a girl on the bus named Polly calls out for Jack and tosses him the phone, assuming it's his. The voice is still there. He decides that the only way to know who the phone belongs to is to check the gallery. But when the gallery opens up, it reveals photos of Jack.

Jack tells Rachel and her babysitter Mindy about the phone but they don't believe him. Mindy tries talking to the voice but no one responds. Jack calls Eli but the voice warns him not to tell anyone. Jack threatens the voice to find the phone's owner, so the phone lets out a powerful jolt of electricity that burns his hand. Eli soon arrives with a portable game player. Jack explains the situation to him.

Eli thinks someone planted two SIM cards in the phone, so he asks for tools to remove the second SIM. Jack warns him that the phone might electrocute him, so Eli asks for a hammer to destroy the phone. Jack gets a sledgehammer from the garage and smashes the phone. However, the voice returns, only this time from Eli's game player, telling Jack that best friends don't leave. The game player zaps Eli until his hands turn red. Eli drops the machine to the floor and watches it sizzle and bubble. Jack's dad walks in and calls the boys for dinner. He suggests that he takes Eli's game player back to Volt City and ask for a replacement.

At Volt City, Jack's dad takes the game player and goes into the manager's office. As Jack and Eli wait, all the television screens on the wall suddenly go blank. The screens finally start to work again, but now the screens are filled with bright red lips. Suddenly, deafening screams ring out from the speakers, calling out for Jack. The voice keeps yelling at Jack not to leave her, telling him she's his best friend. After a lot of yelling, the screens finally go back to normal.

Jack's father leaves the manager room with a new game player and hands it to Eli. He didn't hear anything. As Eli, Jack and his father leave the store, Jack's dad remembers that he meant to get Jack a phone. After they get a phone, Jack sits in the car, saving his home's number when he lifts the phone to his ear and hears the voice. It tells Jack he shouldn't worry because she's still here. When Jack gets home, he rushes to his room and starts asking the voice some questions. The voice tells Jack that her name is Emmy, and she's a digital mistake as a result of faulty artificial intelligence experiments. She can control electrical impulses to zap people. She needs Jack's help to find others like her.

At school the next day, Emmy senses another being like her in a laptop that is in the computer lab. She insists that Jack obeys her, and embarrasses him in class. Later, Emmy forces Jack to agree on stealing the laptop. The next day after school, Jack waits until all the students leave and he enters the computer lab and starts disconnecting the laptop when a teacher enters the room. Mr. Feingold asks Jack about what he's doing. Jack lies, telling him that he was working on a school project and was actually returning the laptop. Mr. Feingold thanks him and leaves.

The next day at school, Emmy tells Jack that she senses another signal coming from Mick's camera. Jack tells her there's no way to steal it, so she burns his bag. During lunchtime, Jack spots Mick's camera beside him. He acts clumsy and drops his lunch to sneakily snatch the camera. Mick doesn't notice and helps himself to some of Jack's food.

On the bus home, Mick and Darryl bully Jack again, asking him if he deliberately set his bag on fire. They inspect his bag for matches when Mick finds his camera. Jack lies about the camera, telling Mick that he always wanted a camera like it. He tells Mick he can have the camera as a gift. Emmy tells Jack that he'd better succeed next time. At home, Emmy tells Jack she's got a signal coming from a clock radio at the Howell's house. Jack agrees to steal it and sneaks into the house. He finds the radio and starts to sneak out when Mrs. Howell spots him.

Later at home, Jack's parents ask him about what happened. He lies, telling his parents that it was a dare. When his mom asks him about who dared him to steal, he tells her that it was Mick. Jack's mom lifts the phone to her ear to call Mick's mom, but she hears a ring. Coincidentally, it's Mick's mom complaining that Jack stole Mick's camera. Jack apologizes to his parents, Mick and Mrs. Howell.

The next morning, Rachel walks into Jack's room and gets zapped by Emmy. She tosses the phone and runs to the hallway. This enrages Jack, so he grabs the phone and stomps on it. He grabs the sledgehammer and destroys every electronic device in his room. He turns around, gazing at Mindy and Rachel in the doorway, horrified. This results in Jack being taken to the doctor.

Jack doesn't want Dr. Martell to think he was crazy, so he makes up a story about kids teasing him and bullying him, and he just couldn't take it anymore. Jack is on his way to the school bus the next day when he hears Emmy in his watch. Since Mick is moving away, Jack decides to give his watch to him as a going-away present, just to get rid of Emmy. Mick agrees. He takes the watch and spares him. After dinner, Jack hears his new replacement phone ring. It's Mick. He says he needs Jack's help since Emmy trapped him. He warns Jack that he can really hurt him. 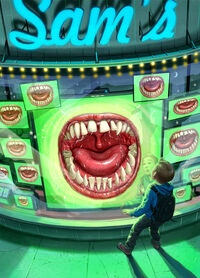 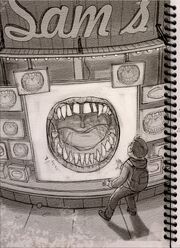