Don't Go to Sleep! is the fifty-fourth book in the original Goosebumps book series. It was first published in 1997.

The cover illustration shows Matthew Amsterdam in a bed as a monstrous hand emerges from under the bed.

Matt wakes up as a twelve-year-old boy again, but  he is now obese. This causes the branch he was on to break, and Matt falls. He knocks on his door, and his mother answers. He tries to persuade her to let him into his old room, but she doesn't recognize him. Matt turns around and sees Lacie, Bruce and Wayne approaching. They chase Matt through the neighborhood until he is able to hide in a line of thick shrubs near his house. Matt hides in the bushes until nightfall. After everyone has fallen asleep, Matt climbs up a tree that grew by his window. He manages to climb into his old room without making a sound, and he falls asleep.

The following morning, much to his delight, Matt sees that everything has reverted back to normal. When Matt gets home from school, his mother has a surprise for him; after some contemplation, she has decided that Matt was right when he said his room was too small, and says she will let Matt sleep in the guest bedroom (like he originally wanted). 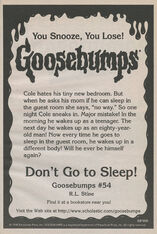 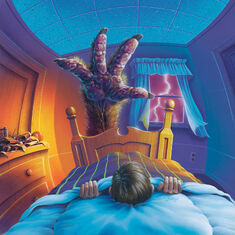 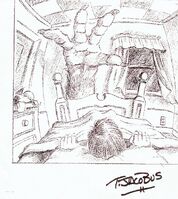 Trading card found in this book

Bookmark found in this book
Add a photo to this gallery

Retrieved from "https://goosebumps.fandom.com/wiki/Don%27t_Go_to_Sleep!?oldid=114311"
Community content is available under CC-BY-SA unless otherwise noted.