Diary of a Mad Mummy is the tenth book in the Give Yourself Goosebumps gamebook series. It was published in 1996.

The cover illustration shows King Buthramaman, the titular mummy, standing next to a wooden table, with green liquid, books, and scientific equipment on it. The mummy is looking away from his diary, when he's writing in it with his left hand, and is holding a science tube, filled with the green liquid, in his right hand. The mummy is also wearing glasses and has gray hair sticking out from underneath his bandages at the top of his head.

All Wrapped Up and No Place to Go...

While you're on vacation you get a chance to check out an exhibit of Egyptian artifacts and a pretty cool mummy. But when you get to where the mummy is supposed to be all you find is a pile of bandages and a really old diary filled with entries that seem to have been written by Mr. Mummy himself!

If you touch the bandages they’ll wrap themselves around you and poof — you're a mummy. If you decide to use the clues in the diary to find the wrapped wonder you'll find yourself searching through the pyramids in Egypt. Will you be stuck there — forever?

You are on vacation in San Francisco, California, and are extremely bored. With you on your vacation are your parents, your five-year-old sister, Susie, and your fourteen-year-old brother, Derek. One day, your family decide to visit a new skyscraper that is modeled after ancient Egyptian pyramids. As part of the grand opening, there is a special limited edition Ancient Egyptian mummy exhibit, featuring the ancient pharaoh, King Buthramaman. You continue to look around in the exhibit and find a diary that seems to have been written by the corpse. When the security guard isn't looking, you quickly put the ancient book under your shirt so you can read it. However, the diary has some tricks up its sleeve and it illustrates the mummy's plans to come to life during the night. 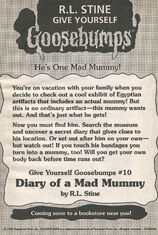 Book advertisement from The Knight in Screaming Armor.

Retrieved from "https://goosebumps.fandom.com/wiki/Diary_of_a_Mad_Mummy?oldid=124723"
Community content is available under CC-BY-SA unless otherwise noted.