Revenge of the Invisible Boy

They Call Me the Night Howler!
Diary of a Dummy is the tenth book in the Goosebumps SlappyWorld book series, and the thirteenth book in the Living Dummy saga. It was published in 2020. [1]

The cover illustration depicts Slappy the Dummy emerging from within a giant diary, holding a quill pen. The words KEEP OUT are etched on the cover. Green slime oozes all over the book, forming a skull on the cover as well.

Billy McGee finds a ventriloquist dummy at the dump. The dummy's name is Slappy, and he causes a whole lot of trouble. But Slappy isn't the only thing Billy discovers. There's a diary as well. What do you do with a diary written by a dummy? Do you read it? Billy has to figure out that answer fast. But Slappy's diary isn't just daily thoughts and feelings. There are clues that lead to something special. Is Billy brave enough to follow Slappy's darkest secrets?

Billy McGee is starting at a new middle school after his family was forced to move due to no longer being able to afford their old house after the death of his mother. His new school is in a rich neighborhood, but he manages to get along with the students despite not being as well off as them. Dad got a job at the dump in order to make extra money. While at the dump, Billy and his sister Maggie find a suitcase containing an old dummy. When they get home, they find a card in his pocket with strange words on it. They read them, bringing Slappy to life. He starts insulting the family and spewing cockroaches everywhere.

After a struggle, Maggie knocks Slappy out with a frying pan and they shove him back into the suitcase, then take him back to the dump. When they get home, they find a diary that fell out of the suitcase and discover that it belongs to Slappy. They read it and find entries of Slappy bragging about the troubles he has brought to previous owners. Maggie finds an entry she finds interesting but Dad swipes the diary away before she can tell Billy about, and then forces the kids to go to bed.

The next day, Maggie explains that one entry had Slappy mentioning wanting to find The Gold, and they assume that this treasure could finally make them rich so dad won't have to worry about finances. The diary ends before he can go into more detail, but he says it will be continued in Diary #2, and the siblings now want to go back to the dump to possibly find it in the suitcase. Despite their dad's orders to avoid the dump, they go there the next day and find the suitcase, only to discover that it is empty.

Back at home, Billy tries reading the diary again and discovers a clue he hadn't noticed before, as there is a mention of a Coldman House, a house in their neighborhood that is rumored to be haunted. They go there, along with Maggie's friend Laci and find a chest containing a man trapped in a block of ice, who breaks out of it easily. He introduces himself as The Cold Man and tries to trap Billy in the chest, but once he grabs the kids, their heat starts to melt him. Then an elderly man walks who tells them he is the gardener. He takes them to the garden, which is seemingly bare until vines start rising up and twist around the kids.

Laci, being small, is able to slip out and she helps Billy and Maggie escape from their vine prison. They run back into the house and end up in a library where they find Slappy's second diary. Before they can read much of it, a female dummy comes in who introduces herself as Goldie. She reveals that she is The Gold that Slappy was referring to. She has powers Slappy has been pining for and was behind the vines and other dangers the kids were facing. She claims she was created alongside Slappy by the same sorcerer and that the kids will be her slaves.

Goldie sees that Billy has one of Slappy's diaries and takes it for herself, then summons rats to attack the kids. In a desperate plan, Billy brings out a sandwich he had packed for himself and throws it at Goldie. The rats swarm around her, which allows the kids to run away, but Slappy appears in the doorway before they can escape. After confirming that he and Goldie are siblings, he reveals that the second diary, which Goldie wanted, actually belonged to her.

The dummies fight over the diary and use their powers to mess with each other. Using one of the spells from the book, Slappy turns Goldie into a rat. The kids ask to be finally let go and he says he has one more trick. He chants some words, and suddenly the kids start obeying his every whim. 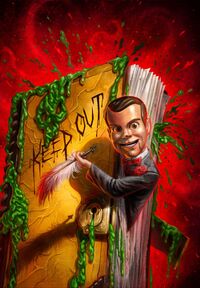