The cover illustration features an oddly-shaped, large goldfish swimming by a shipwreck.

Billy Deep and his sister Sheena are spending another summer in the Caribbean on their uncle's totally cool floating lab. The weather is beautiful. And there are lots of neat places to go swimming and snorkeling. Billy and Sheena are great swimmers. But even great swimmers get into trouble--especially this year. This year there's something really scary going on under the sea. The fish all seem to be growing. Bigger and bigger. With monster-sized appetites...

Billy Deep and his sister, Sheena Deep, are spending their summer vacation in the Caribbean with their uncle — a marine biologist named Dr. Deep — on his boat, the Cassandra. Billy reminisces on the events described in Deep Trouble and hopes he will have more adventures.

Dr. D. shows the kids a fish he caught; the fish appears to be a minnow, but it is the size of a dog. Dr. D. explains that minnows should only be about the size of a goldfish, reminding Billy that he needs to feed his two pet goldfish and snail. Dr. D. recommends that Billy feed the pets using one of the vials of plankton on the ship, which Billy does. Although, he is briefly startled when he sees a head floating in the fishbowl, but Sheena reveals this to be a doll's head and a part of a prank. Angrily, Billy plots his revenge.

Later, the kids go swimming. Sheena finds a large object in the water, and it turns out to be a giant jellyfish. The creature envelopes both kids, but it releases them when it becomes distracted by another giant jellyfish, allowing the kids to return to the ship. The kids look around the boat for the uncle, but they can't find him. The kids find a giant gray monster, and they deduce that it's a snail. The siblings soon realize the snail is atop their uncle. Once the siblings have moved the snail and freed their uncle, they begin pondering the giant animals they've seen. Suddenly, the boat begins tilting, and loud noises can be heard coming from Billy's cabin. The trio inspects the room and finds that Billy's goldfish have become giant. While it makes Billy sad, the trio decides that they need to throw the fish overboard. The group decides that they'll have to deal with the giant snail later.

Unexpectedly, three men show up on the Cassandra. The men say they saw Dr. D.'s ship tilting, so they figured there might be trouble. One man introduces himself as Dr. Ritter, and he asks the Deeps if they've seen anything strange. Billy begins detailing the strange things they've seen lately, but Dr. D. and Sheena — sensing that something is wrong — try to stop him. Suddenly, the giant snail reappears, and Ritter commands his men to detain the Deep family. Ritter reveals that he's been injecting a "growth hormone" into nearby plankton beds, making all the fish who eat the plankton grow massively. Ritter says that his secret hormone could help feed the world, but he can't yet allow his secret be revealed to anyone, as it could possibly be stolen.

The Deeps are each tied to a chair by Dr. Ritter's henchmen. Dr. D. begins contemplating Ritter's plan, speculating that giant fish could disrupt the world ecosystem. The family members are taken onto the ships deck, and Ritter says that they'll be thrown from the Cassandra. Giant seagulls swoop overhead, distracting the henchmen for long enough to allow the Deep trio to escape. The Deeps jump on a lifeboat and are carried off by a large wave. The trio lands upon a small island after several hours. The group is forced to spend the night on the island, but they see a group of giant dolphins swimming about late the following day. The Deeps quickly hop back into their life boat and use one of their ropes to lasso a dolphin. The creature pulls the trio through the night and into the next day. The Deeps have been brought back to the Cassandra, but — once they've boarded the ship — they learn Ritter is still aboard. Unfortunately, the Deeps are too exhausted to fight back.

Ritter reveals one of his secret hormone's side effects: it turns humans into fish. Ritter gives Billy the option to drink a vial of plankton or be thrown overboard, so Billy picks up a vial and drinks. However, Billy doesn't turn into a fish after several minutes of waiting. Dr. D. finds the strength to tackle Ritter. As the Deeps prepare to tie up Dr. Ritter, he drinks a vial of plankton. The crazed scientist turns into a fish and escapes out to sea. Realizing the man can't hurt anyone else, the Deeps head back inside, and Sheena asks how Billy avoided being transformed. Billy reveals that he had replaced the plankton in one of the vials with iced tea in preparation for a prank. Sheena laughs and admits she coincidentally planned her own version of the same prank! Sheena grabs a vial and drinks it, but she quickly begins questioning if she chose the correct vial. 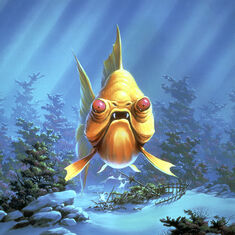 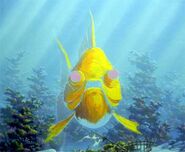 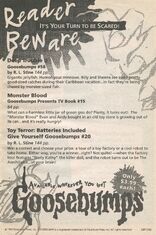 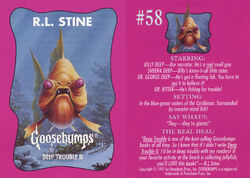