Just when you thought it was safe.... (original)
Swimming lessons won't help you now. (reprint)

The original 1994 cover illustration depicts a hammerhead shark about to attack Billy Deep underwater above a coral reef.

DON'T GO IN THE WATER!

Billy and his sister, Sheena, are visiting their uncle Dr. Deep on a tiny Caribbean island. It's the perfect place to go exploring underwater...and Billy's ready for an adventure. There's only one rule to remember: Stay away from the coral reefs. Still, the reefs are so beautiful. So peaceful. Billy can't resist. But he's not alone in the water. Something's lurking deep below the surface. Something dark and scaly. Something half-human, half-fish...

Billy and Sheena Deep are spending their summer vacation on the Caribbean island of Ilandra with their uncle named Dr. Deep who goes simply by Dr. D. While snorkeling, Billy is nearly attacked by a sea monster and manages to get away. Dr. D's assistant, a muscular graduate student named Alexander DuBrow, serves up lunch to the children: chicken salad sandwiches. However, his cooking's terrible, so Dr. D offers to grill some fish for dinner.

Billy overhears a private conversation between Dr. D and representatives for the Marina Zoo. The zoo representatives want Dr. D to find and trap a mermaid that has been reported in the area. The zoo offers Dr. D the princely sum of one million dollars. Billy is too excited to sleep, so he goes out early the next morning at 6:30 AM to search for the mermaid. Billy's night swimming is suddenly interrupted by a hammerhead shark that almost kills him. Fortunately, the mermaid comes and attacks the shark, saving Billy's life.

Dr. D nets up both Billy and the mermaid and drags them onto the deck of the ship. Billy tries to argue that the mermaid saved his life. But the mermaid is put into a large glass tank on the deck until the zoo crew arrives. Billy is enjoying dreams of Sea People when his slumber is interrupted by the sound of crashes and a splash. Above deck, he discovers the mermaid is in the process of being kidnapped! The men brutally toss Billy into the tank. Billy starts yelling for Alexander as Dr. D is knocked out on the floor and Sheena is offering no help against the four burly men.

Finally, Alexander does show up only to side with the thugs. The thugs toss Sheena and Dr. D into the tank, lock it, and then throw it into the water. The top of the tank is meshed, so the three characters inside the tank fight to break the locks before the tank submerges completely underwater. As they struggle, the "kidnappers" and Alexander speed off with the mermaid in tow. Just when things look their worst, a myriad of mermaids appear and hoist the tank above the water level. Dr. D and the children break open the latches and follow them to the kidnappers' boat in their dinghy. As the other mermaids rescue her, the thugs set fire to Dr. D's dinghy. Billy and Sheena try put out the fire when the mermaid is set free. Suddenly, one of the men grabs the kids while another tries to hit Dr. D in the stomach but misses.

The men then throw Dr. D, Billy and Sheena in the still-aflamed dinghy, as ordered by Alexander, when two kids extinguish the fire, despite a thug having kicked their bucket into the ocean. One of the men tries to lower himself into the dinghy but the mermaids start violently rocking the boat, allowing Dr. D and the kids to escape. The next morning, Dr. D lies to the zoo representatives about not finding the mermaid. Soon after they leave, Dr. D, Sheena and Billy all swear to never talk about the mermaid again. Despite all of this, Billy sneaks out to the coral again in the hope of catching the mermaid to say goodbye.

When Billy is searching for the mermaid, he is attacked by the Sea Monster, and he wonders if people will believe him now.

Just when you thought it was safe...T-shirt (front and back).

Just when you thought it was safe... T-shirt (front and back). 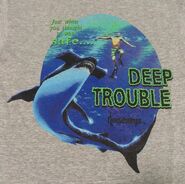 Just when you thought it was safe... T-shirt detail. 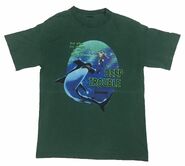 Just when you thought it was safe... green T-shirt. 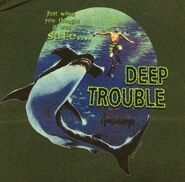 Just when you thought it was safe... green T-shirt detail.

Deep Trouble was adapted into a Goosebumps Graphix story in March 2007 by Amy Kim Ganter. It is the third story in Terror Trips. 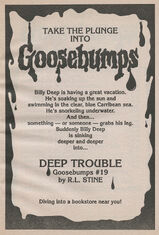 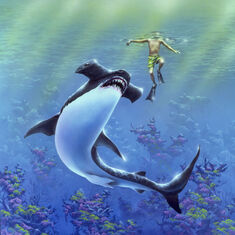 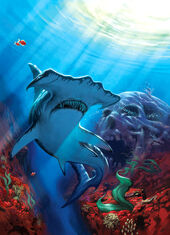