Cody Jones
Danny Anderson is one of the main characters in the tenth Goosebumps book, The Ghost Next Door, and its television adaptation.

When Hannah Fairchild wakes up one summer morning, she discovers Danny Anderson and his mother have just moved into her neighborhood. This strikes at her strange, as the house he's living has been abandoned for years. Despite this, the two become friends, but Hannah can't help but feel there's something strange about him. Danny seems to disappear and reappear out of nowhere. He attends the same school as her, but knows none of her friends. His mother doesn't respond when Hannah tries to talk to her. He even seems to survive nearly fatal accidents, such as falling off a roof. All of this leads Hannah to believe Danny is a ghost.

Hannah begins to follow Danny around for evidence, while he and his friends Alan and Fred get into trouble around the neighborhood. His two friends pressure him to steal, and vandalize property. Hannah eventually confronts Danny about being a ghost. He is confused and laughs her accusation off. He explains that his mother is deaf, which is why she didn't respond to Hannah's attempts to speak with her. The two begin to play a game of soccer when Danny's hand passes through Hannah, revealing her to be the true ghost.

Alan and Fred eventually tell Danny to set off a stink bomb in the house of Mr. Chesney, the town Postmaster. Danny complies, but ends up setting the house ablaze. Danny is trapped in the house, leading Hannah to rescue him. Danny safely makes it out and comes back to his senses. Hannah says one final goodbye to Danny, and asks that he remember her, before vanishing with her family into the afterlife.

Danny is a cautious, but pretty vulnerable person. Danny seems to be a kind person, but is continually pressured by his friends Alan and Fred to engage in risky behavior. He is somehow able to be unharmed from accidents that he could easily be injured or killed from and he slyly claims that he survives them by magic. Danny knows that his mother does not want anyone to know about her deafness as she does not like anyone feeling sorry for her, so he would never tell anyone out of respect for her. He seems very thankful to Hannah for saving his life, and does appear to be a genuine friend to her.

Danny is twelve years old, Caucasian, tall and thin with bright red hair, almost as orange as candy corn, brown eyes and a face full of freckles. He is also very pale. 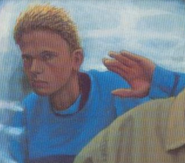 Danny as depicted on the Dutch cover of The Ghost Next Door.