Daniel DeSanto (born October 3, 1980) is an actor who played Gabe Sabry in "Return of the Mummy". 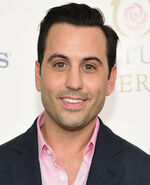 DeSanto in 2009.
Add a photo to this gallery

Retrieved from "https://goosebumps.fandom.com/wiki/Daniel_DeSanto?oldid=134343"
Community content is available under CC-BY-SA unless otherwise noted.