Bride of the Living Dummy
Cry of the Cat is the first book in the Goosebumps Series 2000 book series. It was published in January of 1998.

The cover illustration depicts a closeup of Rip the Cat's face.

Alison Moore is meeting up with her best friend Ryan Engel on her way to school. She is on her bike, rehearsing lines for a school musical when she accidentally runs over a cat in the road, and kills it. She tries to return the cat to a creepy old house, but the girl who answers the door screams in horror, saying her mother won't like this at all. She introduces herself as Crystal and says that the cat Allison killed is named Rip, and he is no ordinary cat. Rip then springs back to life.

Allison goes to school to rehearse the play, but she starts to hear a cat that no one else hears. Rip appears and is killed again, this time by a play prop. He springs to life again, but Ryan doesn't believe this is the same cat Allison killed.

During dinner that night, Allison finds cat hair in her soup. She goes back to her room to see that her toy mice collection has been ruined. The next day during lunch, she finds a cat head in her lunch bag but Ryan sees nothing when he takes a look. Rip returns that night and tries to choke Allison, but she throws him out the window, killing him for a third time. He once again springs back to life and claws Allison. She notices that her cut isn't bleeding.

The next morning, she finds herself gobbling down three cans of tuna. During rehearsals, she starts licking her hands. She climbs a ladder up to a balcony for a scene, and when she gets a phone call from her mom, she jumps down, thinking she can land on all fours. Mom calls Allison to inform her and Dad have to take care of Aunt Emma, so Allison must go home to babysit her brother Tanner. At home, Allison coughs up a hairball and decides she needs to visit Crystal to find out what is happening to her.

She visits Crystal and tells her that Rip has been stalking her, and Crystal says Rip has now used up 8 lives. She then slams the door on Allison. She walks away and bumps into Ryan. She explains to him the creepy things going on, when she finds herself walking to a pet cemetery. She finds Rip's gravestone, revealing that he has been dead for years. She opens Rip's coffins, and the cat comes out. Suddenly, the other tombstones start rumbling and several other undead cats come out. The ghost cats form a tornado and the cats start chasing Allison.

She runs to Crystal's house, where she takes Allison to the basement to meet her mother. It turns out she is a half human, half cat creature. Crystal's mother explains that she is a scientist and Rip was part of a failed experiment that killed many cats. Rip was too evil to die, so he came back and started taking her life force so he can keep living and not use all of his nine lives. His scratch also turns people into cat creatures, which is why Allison has been acting like a cat. Rip wanted Crystal's life but her mom wouldn't allow it, so she let Rip use her life instead. Now her life is almost out, and they will use Allison as a sacrifice.

Rip and his cat friends appear, but Allison throws out one of her toy mice, hoping it will distract them. This works, as the cats defeat each other while fighting over the toy. Rip gets caught up in the cat fight and is soon lying on the floor, defeated. Crystal and her mom thank Allison for freeing them of the evil cat.

The next day, Allison and Ryan are walking to school. Ryan dives down to get something and Allison sees that it's a mouse. She claws at him and demands that Ryan give it to her, because she saw it first. 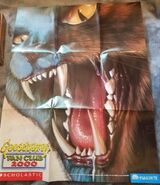 Decal found in the first printing of this book 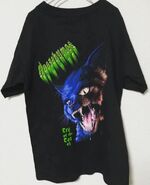 "Cry of the Cat" was adapted into a two-part episode of the Goosebumps TV series. It is the fifth and sixth episode of season four, and the seventy-first and seventy-second overall. 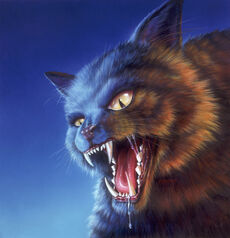 Retrieved from "https://goosebumps.fandom.com/wiki/Cry_of_the_Cat?oldid=124328"
Community content is available under CC-BY-SA unless otherwise noted.