Cronby the Leprechaun (video games only)

Josh Phillips
Cronby is a cave troll from the eleventh Give Yourself Goosebumps book, Deep in the Jungle of Doom.

Cronby is a cave troll that resides in the Amazon rainforest.

He is seen in some bad endings:

For a good ending, while deciding to bet for the third piece of gold, Cronby asks you one more Goosebumps question. After answering correctly, Cronby hands you the three gold nuggets. You give them to the Stone King and he rewards you and Zoe handsomely.

Concept art for Cronby from Goosebumps.

Cronby with Jack Black at the 2014 San Diego Comi-Con.

Cronby standing in the mall in Goosebumps: The Game. 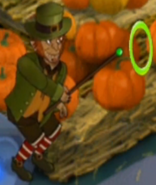