Goosebumps Wiki
Register
Don't have an account?
Sign In
Advertisement
in: Books, Goosebumps Most Wanted, Sequels,
and 8 more

A Nightmare on Clown Street
Creature Teacher: The Final Exam is the sixth book in the Goosebumps Most Wanted book series. It was published in 2014.

This book is the sequel to the Goosebumps Series 2000 book Creature Teacher, which released sixteen years prior.

The cover illustration depicts Mrs. Maaargh in a room with math problems written on a greenish-yellow wall.

It doesn't take long for Tommy to find out he's in big trouble. His whole family is obsessed with "being the best" and so he is sent off to a special camp to help make him into a "winner." When Tommy gets there he sees that something isn't right. All the kids are so competitive - it's almost like their lives depend on it. There's talk all over the place of a special "teacher," Mrs. Maaargh, who takes her lessons on winning very seriously. Can Tommy survive The Final Exam?

The book begins with a message from R. L. Stine. He welcomes the reader to his office and starts to talk about the wanted posters on the walls. You are studying the poster of Mrs. Maaargh, the Creature Teacher. R.L. Stine tells you that that a boy named Tommy Farrelly can tell you all about her. He tells you you'll soon find out why she is MOST WANTED...

Tommy is twelve years old, and for his summer vacation he's going to Winner Island Camp. This is not how Tommy wants to spend his summer, but in his family, everybody is extremely competitive. It's always about who's the fastest, strongest smartest, luckiest. Tommy likes to take it easy but his family wants him to see the world the way they do so they're sending him to Winner Island Camp to make him a winner.

Tommy and his family go to a restaurant called Andy's Fish Shack. There's a dock near the restaurant where a ship will come to bring Tommy to the camp. At the restaurant, Tommy's family has a few pointless competitions over who can eat the fastest and so on. Tommy's mother takes out a brochure for the camp with a note from the Director, Uncle Felix. The note reads: "When you arrive, you are a LOSER. But losers NEVER leave Winner Island."

Tommy is a little freaked out by the note. Their food soon arrives and the whole family puts hot sauce on it except for Tommy. They apparently put hot sauce on everything. A man named Jared soon comes to pick Tommy up. He is only picking Tommy up because the camp already started and he's late. On the boat he finds more brochures that have similar messages as that of the first one. Tommy soon gets to the island and Jared tells Tommy he hopes he see him on the way back. A counselor named Robb greets Tommy and takes his bags. Tommy sees a group of kids fighting each other and the counselors just watching. Robb tells him those are just their morning warm-ups.

Robb tells Tommy that Uncle Felix may want to talk with him. He directs Tommy to his office and promises he'll take Tommy's bag to his cabin. There's a sign on his office door reading: DO NOT KNOCK. Tommy listens to the sign and fails a "test". Apparently, a winner would have ignored the sign. He eventually lets Tommy in and asks him if he met the Teacher. He says no. Uncle Felix tells Tommy he can report to Cabin J. Tommy thought he was going to cabin 12 and it is then revealed that Robb isn't a counselor. All of the cabins are actually numbered and Robb robbed him of his belongings. Uncle Felix tells Tommy that was his first lesson: never trust anybody.

Tommy leaves his office and wanders around the camp in an attempt to find Cabin J. While he's wandering, he meets a girl named Sophie. He asks if she knows where Cabin J is. She tells Tommy that there is no Cabin J; the cabins are all numbered. Sophie tells Tommy about The Teacher. The Teacher, she says, is a monster named Mrs. Maaargh. Mrs. Maaargh eats the worst loser. She showed up on the island one day and Uncle Felix couldn't do anything about it. He promised her she could eat one camper. Tommy doesn't believe her and thinks that she's trying to pull a joke on the new kid. She angrily storms off when Tommy doesn't believe her and says she'll eat him for coming to camp late. Tommy finds Cabin 12 and is drenched with water by a kid named Ricardo. They're bunk mates. He apologizes, as he thought Tommy was kid from Cabin 10 he was having a war with. Ricardo tells Tommy he had his stuff stolen as well by a guy named Steele.

Suddenly Sophie runs into their cabin in a panic. She tells them that Mrs. Maargh had decided to eat Tommy right away instead of at the end of camp. Ricardo starts to panic but Tommy still thinks it's a joke. Against Sophie and Ricardo's advice, Tommy goes off to face the "imaginary" Mrs. Maaargh. Along the way, Tommy sees everybody running away because Mrs. Maaargh was letting a wolf out. Tommy still doesn't believe and goes into her office. Tommy finds Mrs. Maaargh, who does look like a monster. Tommy thinks her ugly, monster face is a mask and tries to pull it off. Tommy is horrified when he realizes it's not a mask, it's her face! She screams in pain and rage. Tommy tells her he's sorry and did it because he didn't believe in monsters. This makes her more angry. She tells Tommy that she eats the loser at the bottom of her chart, and Tommy had just sunk to the bottom of her chart.

Mrs. Maaargh then tells Tommy he had to be punished for hurting her face. She gives him a spoon and tells him to pick her nose with it for her. Tommy refuses to do so and he runs out of her office. Tommy runs to the island's dock where the boat that took him there is parked. When he gets there, a snake attacks him. Then, Uncle Felix catches him and takes him back to Mrs. Maaargh's class.

Whenever Tommy tries to escape, he is caught. He finds himself at the bottom of her chart for most of the time. He ultimately loses and Mrs. Maaargh prepares to eat him. But he has one last thing to fight her off with: a bottle of hot sauce. Tommy squirts it at her and it's so hot that she jumps off the island and into the water. Mrs. Maaargh leaves and never comes back.

For a while, all of the kids and camp counselors are happy because Mrs. Maaargh is gone. A few days later, a monster with two heads comes to the island. He says his name is Mr. Baaargh and that Camp Winner will continue as normal. Mr. Baaargh pulls out a chart telling the kids to keep on eye on the chart, because at the end of camp, he plans to eat two of them. 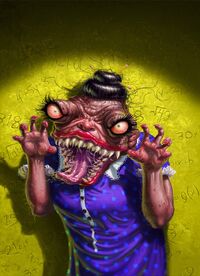