Depends on a specific ending

Maraynne Gorka
Countess Yvonne is a female vampire who appeared as an antagonist in the fifteenth Give Yourself Goosebumps book, Please Don't Feed the Vampire!.

Countess Yvonne appears in the book. She is featured in some bad endings.

She also makes a cameo appearance in the Goosebumps movie portrayed by Maryann Gorka, but was credited as "Monster #10." She appears as part of Slappy's army of monsters when released alongside the other monsters. She can be seen during the scene when the monsters chased everyone in the Gym.

Countess Yvonne with an umbrella in Goosebumps HorrorTown. 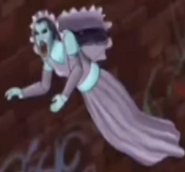