Count Nightwing lived in a castle full of other Vampires and his daughter Cynthia for a hundred years and he was the feared leader of his clan. Every night, he and the other vampires would go out in search of blood in order to quench their thirst. Count Nightwing had been living off his life and reign by enslaving others and drinking blood. Sometime later, he fell into a deep sleep for a hundred years. But not before he was given a bottle of Vampire Breath, which was very important to all vampires as they can't live by blood alone and Vampire Breath does everything for vampires as it allows them to travel through time, become invisible and reappear, giving them energy, keeping their skin smooth and clear, helping them sleep, keeping their bones from drying into powder and freshening their breath. And it also restores the vampire's memory, helping them remember.

Count Nightwing's coffin was put at the end of a secret tunnel in Ohio and he slept there until two kids, Freddy Martinez and Cara Simonetti discovered his coffin after discovering the secret tunnel, which was located underneath Freddy's basement. Count Nightwing was terribly thirsty after his long sleep, so after he introduced himself to them, he went after the two children throughout the tunnel to drink their blood. He was about to take some of Cara's blood when he realized he didn't have his fangs. Count Nightwing feared himself to be doomed for a moment until he asked Freddy and Cara to help him by finding the Vampire Breath, to which they replied that they dropped it and a lot of it spilled out. Count Nightwing became desperate to have it so he can go back to his time where he had his fangs and was astounded to know that he had been asleep for a hundred years. He led Freddy and Cara back to the room where his coffin is and ordered them to find the bottle. Cara eventually found it and Count Nightwing opened the bottle and took him back to his time.

Count Nightwing had returned to his time and castle in hopes of being able to remember where he had left his fangs. While he was at it, he found that the Vampire Breath had inadvertently transported Freddy and Cara back to his time with him and they angrily told him that he had promised them that he would go away and leave them alone. They demanded him to send them home, to which Count Nightwing replied that he doesn't know how and told them that he will turn them into vampires as soon as he finds his fangs. Count Nightwing then remembered the VAMPIRE BREATH and explained to the two kids about what it does and since it was 1880, his bottle was still full so he went off to find it, trying to remember where he put it. Later on, Freddy had jumped out of the only window in the kitchen that didn't have bars that was facing a ravine while he and Cara were trying to escape, so Count Nightwing changed into a bat and caught Freddy before he could fall all the way down.

Count Nightwing then told Freddy not to try to escape again as it is a waste of time and he won't catch him next time. He then ordered the two children to help him find the bottle of VAMPIRE BREATH and went to a guest room to see if it was there. After that, he caught Gwendolyn advancing on his two prisoners, resulting in a fight between him and her. Then he caught up with Freddy and Cara in a room full of bottles of VAMPIRE BREATH and he remembered that this was where he hid his bottle. He started to look around for his bottle, with Freddy and Cara trying to get to it first. Freddy eventually found it and Count Nightwing was about to open it when Freddy made him drop it by ramming him in the chest. Then the two kids played a keep-away game of Monkey in the Middle with him, to which Count Nightwing soon lost patience with. He eventually got hold of the bottle and opened it. At first, it turned out to be an empty bottle and Freddy had the full bottle. Count Nightwing swiped at the bottle, only to cause Freddy to drop and break it and letting a thick sour mist pour out.

The mist had transported the three back into Freddy's basement at their time. Count Nightwing was most dismayed at this and even more upset that there wasn't any Vampire Breath to take him back to his time and he will never remember getting his fangs. Count Nightwing was just advancing on the two kids when Freddy's parents came into the basement. Count Nightwing recognized his daughter Cynthia who was thrilled to see her father awake after a hundred years. Her husband also introduced Count Nightwing to Freddy, who is actually his grandson which he was most astonished. Count Nightwing then told Cynthia that he had lost his fangs to which his daughter replied that they are in the glass in the bathroom where he left. After he finally got his fangs, Count Nightwing suggested to Cynthia and her husband that they fly into the night as he was really thirsty after a hundred years. The three vampires then changed into bats and flew out of the basement window, leaving Freddy in shock to know that he was a vampire too.

Count Nightwing is very old with really pale skin, a completely bald head and tiny white hands as thin as bones. He is usually seen wearing an old-fashioned black tuxedo and a purple cape. In Goosebumps HorrorTown, he's given a younger look with long blond hair and a more colorful attire.

Count Nightwing acts in exactly a way a vampire would act. He is highly fearsome and has a real craving for blood. And he has a special need for VAMPIRE BREATH as it does everything for him like every other vampire. He was very mistreating to Gwendolyn, as he had made her a slave rather than join the other vampires. He has very little patience and never likes to be kept waiting and he will get really mean if he is kept waiting for too long. There have been moments when Count Nightwing showed a bit of mercy, such as promising to leave Freddy and Cara alone if they helped him find his bottle and when he rescued Freddy when the latter was falling down a cliff. Count Nightwing is also close to his daughter and son-in-law and is now possibly close to Freddy as well. 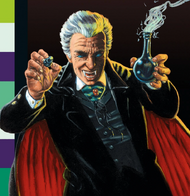 Count Nightwing as depicted on the French cover of Vampire Breath. 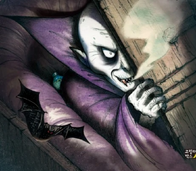 Count Nightwing as depicted on the Korean cover of Vampire Breath. 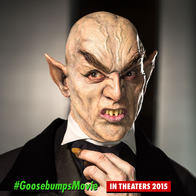 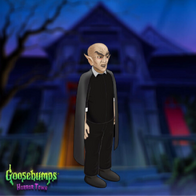 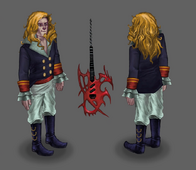 Nightwing in his final monster form as seen in HorrorTown.