Night of the Giant Everything
Claws! is the first book in the Goosebumps Hall Of Horrors book series. It was published in 2011.

The cover illustration depicts a cat in a fierce pose with its claws sticking out.

Mickey is put in charge of his vacationing neighbors' cat, Bella. His best friend, Amanda, comes along to help out. All they have to do is make sure Bella has enough to eat and doesn't destroy the furniture. Seems simple enough. But Bella escapes from the house and is hit by a truck. Mickey feels awful.  Amanda has an idea to replace the cat with a look-alike from the local pet store, Cat Heaven. They find a cat that looks exactly like Bella, but the clerk won't sell it to them, so they decide to steal it. Big mistake! These cats are more than they seem to be....

Mickey and his friend Amanda agree to take care of Mrs. Caplan's cat while she is away. The black cat, Bella, seems to really like Amanda. While watching the cat, Amanda accidentally gets her gum on Bella's tail. Amanda has to cut off some of Bella's fur in order to remove the gum. Everything really goes bad when Mickey and Amanda accidentally leave the front door open. Bella runs outside and is hit and killed by a large truck. The truck driver stops and apologizes to Mickey and Amanda before driving off. Mickey is worried because Bella's body has seemingly disappeared, but Amanda says that the driver probably took the body. Before Mickey has the chance to tell anyone about Bella's death, Amanda suggests going to the pet store and buying an identical replacement cat to take Bella's place. The kids go to a pet store called "Cat Heaven". While the two friends peruse the odd pet store, they stumble into a room that had a "Keep Out" sign on the door. All of the cats in this room are completely silent. One of the cats looks exactly like Bella. A worker, Lou, says that the store won't sell that particular cat. Amanda distracts the worker and Mickey steals the cat. Mickey accidentally sets several other cats free in the process.

When the two kids arrive back at Mrs. Caplan's house, "Bella Two" seems to be adjusting quickly to her new home. However, Bella Two freaks out and tears apart Mickey's shirt. Later that night, Mickey lies down to go to sleep. He hears the sound of a cat in his room, but he can't find any cat. He notices that all three of his pet fish are gone. Chunks of the three fish are still floating in the tank.

The next day, Mickey and Amanda go to the Caplan's house and check on Bella Two. Bella Two seems to be well behaved until she begins clawing at the couch and making a mess. Mickey and Amanda leave the Caplan's house in order to get to school, but they are stopped when they see Lou and two other workers from Cat Heaven walking around. Mickey and Amanda manage to avoid them and get to school. At school, Mickey is startled throughout class because he thinks he can hear the cries of a cat. Strangely, nobody else in the class is able to hear a cat. At lunch, Mickey finds an orange cat in his backpack, but when he tries to show it to Amanda, it disappears. Later, while in the locker room, Mickey starts hearing many cats. He wants to stop hearing the cats meowing desperately. He is eventually confronted by the large group of cats responsible for the noise. They all look menacing and have patchy, torn-up fur. They all begin jumping on Mickey, but vanish when Mickey's gym teacher appears. When Mickey leaves school, his is very nervous. He is almost stopped by Lou and the two other workers from Cat Heaven, but he manages to run away from them. All three workers begin chasing Mickey. Mickey runs back into the school and hides in a locker until the men leave.

Mickey sprints back to the Caplan's house. He opens the door and Bella leaps on him. However, the cat falls through him. Mickey becomes really scared when he notices the missing patch of fur on Bella's tail. This cat was Bella One! Mickey decides that he must take Bella back to Cat Heaven. When Mickey gets to the pet store, Lou tells him that they will not take Bella back and that Bella is dead. That was what Lou had been trying to tell Mickey for the past few days.

Mickey goes back to the Caplan's house. Amanda is there, so Mickey explains what happened. When the two kids go inside the Caplan's house, they find that the house now contains many cats. Mickey assumes that all of these cats are dead. Suddenly, Mrs. Caplan arrives, and she immediately asks how all of the cats got into her house and demands to see Bella. Mickey and Amanda both explain that Bella was killed by a truck and that they had tried to replace her with a cat from Cat Heaven. Mrs. Caplan then says that Bella has been dead for four years. Mr. Caplan tells the kids that Bella had been hit by a truck and killed four years ago, but they were able to bring Bella back by visiting Cat Heaven. The name "Cat Heaven" is very literal. Mr. Caplan also explains that if an undead cat from Cat Heaven is let outside, it will reenact its death. Mickey then realizes that when he let out many of the dead cats by accident, they began haunting him. Mr. Caplan explains that if a cat was taken from Cat Heaven by anyone other than its true owner, the undead cat would become evil and haunt the new owner forever. Then, Mickey has an idea to get rid of all of the cats. Mickey runs to his house, he grabs his pet mouse, and then he runs back to the Caplan's house. Mickey shows the cats the mouse and coaxes them outside with it. Once the cats are outside, they would have to reenact their deaths and be sent back to Cat Heaven. Mickey is sad that he had to sacrifice his mouse. Mr. Caplan and Mrs. Caplan congratulate Mickey on his quick thinking.

While he is going to his tennis lesson, Mickey sees a sign for a store called "Mouse Heaven". Mickey visits the store and finds his pet mouse. 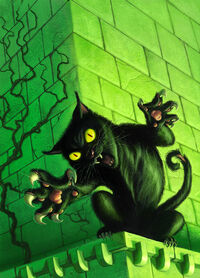