Human
The lost class of 1947 refers to a group of students from Bell Valley Middle School that disappeared in 1947. They were sent to the strange black and white dimension known as Grayworld. They appear in the fifty-ninth Goosebumps book, The Haunted School.

In 1947, their photo was being taken by a bitter man named Mr. Chameleon. He hated kids so when they acted rowdy, he took their picture to send them to the Grayworld. Sometime after being sent to Grayworld, some of the children eventually went crazy and fled the school due to being without color for so long. Soon after, they began a terrifying cult of sorts involving a pool of a oily black substance. According to the others who still remain in the schoolhouse, they cover themselves in the substance every night, having also created their own laws and strange beliefs unlike the other children who stay in the school. For their own safety they have apparently given up all hope of escape or rescue.

Tommy Frazer and Ben Jackson from the modern age of 1997 were transported into Grayworld. They ignored Seth and the other kids' warnings about the other children and journeyed outside of the school, escaping through a window. Once there, they were ambushed by the other members of the missing class who are utterly surprised that the two still have color. This completely upsets them so they surrounded the two boys and began a strange dance and chanting to turn them as gray as they are. They were saved by Seth and the two girls Mary and Eloise at the last minute. The other kids continued to surround them as they attempt to once again escape until Tommy used his lighter. The bright blinding light and heat frightened and confused the other children who scattered to safety. Seth and the two girls managed to lead both boys back to the safety of the school.

Eventually it was revealed that Thalia Halpert-Rodis was part of the class and managed to escape using her lipstick, which still had color. She decided to stay with her friends while Tommy and Ben went back home. However, when they went to take a class photo, Mr. Chameleon turned out to still be alive and was the photographer. The photo was taken, likely sending them back to Greyworld. 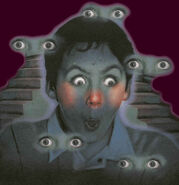 The class of 1947 surrounding Tommy as depicted on the French cover of The Haunted School.

The class of 1947 on a photo as depicted on the Icelandic translation of The Haunted School.