Ellen-Ray Hennessy (TV)
Melissa Brewer (film)
Clarissa is a character and the main antagonist from the twelfth Goosebumps book, Be Careful What You Wish For..., and its television adaptation.

Clarissa is a witch who was looking for her way home when she runs into an unnaturally tall 12-year-old girl named Samantha Byrd. Samantha helps the old woman and is rewarded with three wishes. Samantha is skeptical, but decides to humor Clarissa by wishing that she were the strongest basketball player on her school team.

After some aimless wandering after her wish to make Judith to disappear makes everyone else disappear as well, Samantha meets up with Clarissa. Clarissa apologizes for the wish, stating that she is not skilled in magic and could not make Judith disappear without making everyone else disappear. Clarissa offers to cancel the second wish and give Samantha a third wish...if Samantha can make a clear wish. Samantha wishes that everything is back to the way it was, except that Judith becomes Samantha's friend....which makes Judith obsessed for her.

Samantha tries to get away from Judith and ends up crashing her bike in front of Clarissa. Clarissa, feeling sorry that Samantha is not happy with her final wish, grants Samantha a fourth wish. Samantha wishes that she never met Clarissa and that Judith was the one who met Clarissa instead. The wish is granted and Judith becomes Clarissa's friend. When Judith yells "Fly away, Byrd!" Clarissa transforms Samantha in a crow.

Clarissa is a kind woman who only wants to spread happiness. She becomes unhappy when her magic does not produce the desired effects.

Clarissa is described as being "pretty in an old fashioned way." She appears as being somewhere in between old and young. She wears a red shawl with a long black skirt. She has long black hair and eyes "as dark as coals." 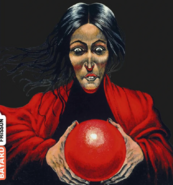 Clarissa as depicted on the French cover of Be Careful What You Wish For.... 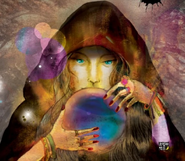 Clarissa as depicted on the Korean cover of Be Careful What You Wish For.... 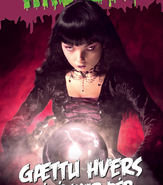 Clarissa as depicted on the Icelandic cover of Be Careful What You Wish For.... 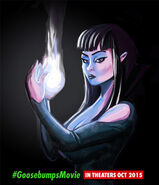 Clarissa and Sam depicted on a Goosebumps trading card.

Artwork by Rod Hunt for Where's the Creature game.
Community content is available under CC-BY-SA unless otherwise noted.
Advertisement