Blake McGrath
Casey Brewer is one of the main characters from Stay Out of the Basement, and its television adaptation. He is the younger brother of Margaret Brewer.

Casey and Margaret's father, Dr. Michael Brewer was a botanist. Dr. Brewer work had transferred him and his family from Michigan to California so that he could work in PolyTech, where he could perform experiments. But something happened in the lab that had something to do with the plants Casey's father had been working on, which got him fired. After he was fired, Dr. Brewer started working at home in the basement, which he forbade everyone else from going into. Casey's father had become so wrapped up in his work that he never got up to spend time with his family. The only time when Dr. Brewer left the house was when he needed to get some air. Dr. Brewer's strange behavior caused tension in his family. Both Casey and Margaret were worried about their father.

Casey usually isn't very mature. He enjoys teasing his sister and annoying her. However, when Casey is scared or concerned he usually relies on his sister, Margaret, for help and solace.

Casey is eleven years old and Caucasian. He has long, straight, blond hair, pale, blue eyes, and freckles on his face. 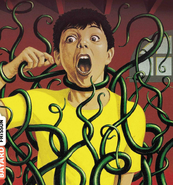 Casey as depicted on the French cover of Stay Out of the Basement. 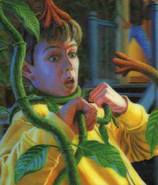 Casey as depicted on the first printing of the Dutch cover of Stay Out of the Basement.

Casey as depicted on the second printing of the Dutch cover of Stay Out of the Basement.