Captain Long Ben One-Leg is the main antagonist in the second Goosebumps HorrorLand book, Creep from the Deep.

He was the captain of the Scarlet Skull, until that fateful day the black fog rolled over his ship and he ended up in the land of the dead! Two-hundred years later, Billy Deep and Sheena Deep swim into that exact black fog. There, they find Captain Ben on a stranded island as a zombie and they have to escape him and his chanting henchmen. He has minor appearances in other Goosebumps HorrorLand books.

In The Streets of Panic Park, he and the other villains help the Very Special Guests escape Panic Park.

Captain Long Ben One-Leg appears in the Goosebumps film portrayed by Steve Quinn, but credited as "Monster #22." He is among the monsters that are released by Slappy. While he has his one leg, Captain Ben does not have a skeletal appearance. He is also among the monsters who do not speak.

Captain Ben was really bad news when he was alive. He was highly sadistic, having fed some of his men to rats if they made him angry or if he was bored, he would feed them to the rats for his amusement and he would like to watch a man bounce. Being dead for over two hundred years has put Captain Ben in a very bad mood, making him even more bad news and more sadistic than when he was alive and he would get real fiery when crossed. Captain Ben is also quite greedy and deceiving, being a notorious liar and is always delighted to have prisoners. And he insists that he asks the questions and he answers the questions. He was also really bent on having his "leg" back, as it really annoyed him to have just one leg. Due to what is said about him, Captain Ben is without a doubt the most evil pirate in the world.

Captain Ben is a zombie pirate who has a whole face with a thin black mustache, a short black beard and dead green eyes that are sunk deep in his head. He wears a long black coat with gold buttons down the front and the gold stripes of a captain on the shoulders. 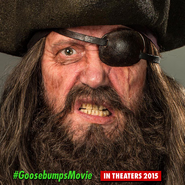 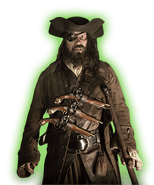 Artwork by Rod Hunt for Where's the Creature game.
Add a photo to this gallery
Retrieved from "https://goosebumps.fandom.com/wiki/Captain_Long_Ben_One-Leg?oldid=113464"
Community content is available under CC-BY-SA unless otherwise noted.