A long time ago, a dark fog descended over Camp Spirit Moon. This fog turned all of the camp's residents into ghosts. Now, if any members of the camp try to leave, they will dissipate into the fog that turned them into ghosts. The ghosts need to possess a human body in order to escape.

When Harry and Alex Altman attend the camp, they begin noticing very strange things. The other members of the camp seem to be constantly trying to scare them. When the boys find out that the other camp members are ghosts, they attempt to run away, but the other members of the camp try to stop them and possess them. However, all of the ghosts begin fighting over who will get possess the boys. As the ghosts fight, they begin blending together into a smokey mist.

The mist dissipates, allowing Harry and his brother to leave. However, Harry soon discovers that Elvis successfully possessed Alex.

Excluding Harry Altman, all campers and staff members end up as ghosts at some point throughout the story — with the possible exception of the bus driver from early on.

The ghosts of Camp Spirit Moon all act mischievous. They enjoy scaring Harry and Alex with frightening acts that become more frightening as the story progresses. Be it pretending to have a fork in their neck, or a tent pole through their foot. The only exceptions appear to be Elvis and Lucy, who act far nicer to Harry and Alex, but it's soon revealed that they are doing so only so that they can possess the two boys and escape the camp.

All of the ghosts of Camp Spirit Moon dress in traditional camp uniforms. White t-shirts with white shorts.

The ghosts can look like living humans, but to do so requires the use of protoplasm, which can run out quickly and wear them out. Due to being ghosts, nothing can harm them, which is why they pretend to hurt one another in order to scare Harry and Alex. Their other power is the power to possess a living being, being able to use their body as a vessel to escape the camp.

Camp Spirit Moon is surrounded by woods and hills. The camp is positioned next to a round lake where there are canoes and a dock. Cabins line the lake's edge. Camp Spirit Moon features a baseball field, a soccer field, archery targets, a mess hall, and a campfire.

Campers are encouraged to participate in sports and hikes. Each night, the campers gather around a campfire to sing songs and tell stories. The camp has an official song; while the reader isn't told exactly what that song is, the refrain is, "We have the spirit—and the spirit has us." 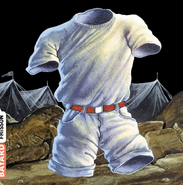 Camp Spirit Moon as depicted on the French cover of Ghost Camp. 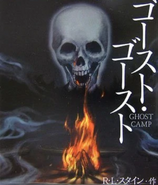 Camp Spirit Moon as depicted on the Japanese cover of Ghost Camp.
Community content is available under CC-BY-SA unless otherwise noted.