Government
Camp Nightmoon is a location in the ninth Goosebumps book, Welcome to Camp Nightmare, and its accompanying television adaptation.

Camp Nightmoon, a summer camp, split up into two parts: a boys' camp and a girls' camp. The camp is surrounded by sloping hills and is next to a river.

When Billy arrives at camp, he notices that it's very strange. As soon as the campers arrive, they are almost attacked by wolf-like creatures. Uncle Al, the camp director scares the creatures off, and tells them that many dangerous creatures lurk in the forests of Camp Nightmoon. He says that a few campers have even been attacked by bears over the past few years. Because of this, there is a rule against sneaking out of your cabin at night. He also forbids any campers from entering a cabin known as The Forbidden Bunk, where a monster named Sabre is said to dwell.

Later, Mike, one of the campers, is bitten by a snake and is told that there is no nurse at the camp. Larry, Billy's bunk counselor, seriously injures one of the campers during a game of scratchball. Over time, many campers start disappearing. When Billy tries to get to the bottom of what's going on, the counselors and staff are dismissive, and even begin telling Billy that the missing campers never existed.

One night, Billy is awoken by Larry unexpectedly. Larry guides Billy into the woods, and they find a group of boys and Uncle Al.

Uncle Al provides the boys with tranquilizer rifles and says that they will need to hunt escaped campers. Billy refuses to hunt, and Uncle Al leaps at him. Billy fires his rifle at him. However, Uncle Al laughs and says that Billy passed. All of the missing campers and Billy's parents emerge from the woods. Uncle Al explains that he has been the subject of a government test. Billy's parents, two scientists, will be going on an important trip, and they want to take Billy with them. Because of his age, Billy needed to pass certain tests in order to gain clearance to go. Because of his bravery and logic, Billy passed all of the tests. Billy's parents will be venturing to a far away planet to investigate the creatures that live there. The planet is called Earth.

The girls' camp likely also has a campfire area because Billy thinks he sees it at one point in the story.

While Camp Nightmoon features many counselors and staff members, only a few are named. 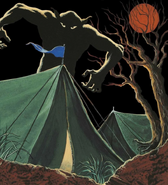 Camp Nightmoon as depicted on the second French cover of Welcome to Camp Nightmare.