Goosebumps
(2003 - 2007 reprints)
Calling All Creeps! is the fiftieth book in the original Goosebumps book series. It was first published in 1996.

The cover illustration shows the Creeps making use of a telephone booth.

REACH OUT AND SCARE SOMEONE...

Ricky Beamer is furious when he gets kicked off the school paper. So he decides to play a joke on Tasha, the bossy editor in chief. Just a little joke. Harmless, really. After school one day he sticks a message in the paper. If you're a creep, call Tasha after midnight, it reads. But somehow Ricky's message gets messed up. And now he's getting calls. Strange calls from kids who say they are creeps. Creeps with scaly purple-colored scales and long sharp fangs...

Ricky Beamer sneaks out one night to put a message in the school newspaper that reads "Calling all Creeps. Calling all Creeps. If you're a real Creep, call Tasha at 555-6709 after midnight.". Ricky recalls why he is doing this. He is harassed by his schoolmates and called names. He has four enemies who are eighth-graders named Wart, Brenda, David and Jared. He is on the school newspaper, which is called the Harding Herald. The head of the school newspaper is a bossy eighth-grader named Tasha McClain, who treats sixth-graders like dirt. Ricky's only friend is a new girl, named Iris Candler. One day, he is about to get a Pepsi can from the refreshments desk, when two of his enemies, David and Wart, come along. Wart blocks Ricky's way and David says he wants the can of Pepsi. Ricky says he wants it and both of them start snatching it from each other. The can slips from David's grasp and falls on Tasha's keyboard. She calls Ricky a creep and says he is off the paper.

The next morning, Ricky gets a call from Tasha. She says there is an emergency and she needs Ricky. She gives Ricky her father's expensive camera and says if anything happens to it, Ricky is off the paper.  Ricky has to take pictures of the children who are washing cars for the 'car washing campaign'. When Ricky reaches the spot, he tells the children to make a pose for the picture. But instead, they start throwing water at him from their hoses. He finds out that the children are his eighth-grade enemies. Ricky is tired of his enemies always bullying and harassing him, so he tackles Wart, takes his hose and throws water into Wart's father's car. The camera is soaked and when he tries to run away, he slips and breaks the camera.

Tasha says this was Ricky's last and final chance and now he is off the paper. Iris sees the whole thing, and says Tasha is mean and cruel. Ricky decided to play his prank as revenge for everything Tasha has done to him. He calls Iris and tells her what he did last night, but Iris says that he is in big trouble. Ricky finds out what she meant when he discovers that Tasha caught on to his plan and put Ricky's name and phone number in the paper instead.

Sure enough, Ricky gets calls from children saying they are Creeps, and saying strange things like "When shall we meet?" The next morning, everything goes perfectly normal at school. Ricky notices that nobody is harassing him. Finally, at lunchtime, somebody throws a paper ball on him. He looks around for somebody who could have thrown it, but everyone is busy eating their lunches. He reads it and it says, "When will the creeps meet?"

When Ricky is about to leave school, his enemies get a hold on him and take him to the forest near school. They start apologizing to Ricky and start calling him their commander. At first, Ricky takes it all as a joke. Then they transform into purple lizard-like creatures with long tongues. They think Ricky is their commander because of what it said in the paper. They say humans are the past and creeps are the future. They ask Ricky where to plant the identity seeds to turn everybody else into creeps. If they do not plant the seeds before they go stale in a week, they will fail their mission.

Ricky plays along and tries to get away to get help, but Wart says he has got a plan. They will sneak into the lunchroom and put the identity seeds in the food, so everyone becomes a creep. Ricky has to do what they say, because they think he is their commander. So he enters the kitchen and pretends to fall, letting the seeds spill. Unfortunately, Brenda has extras. Now Ricky has no plans and he sprinkles the seeds onto the macaroni ans stirs them in.

After lunchtime, Ricky waits for all the children to turn into creeps, but they do not. After school ends, the creeps grab Ricky and take him to the forest again. They ask Ricky why their plan did not work. He realizes and tells them that nobody eats the macaroni, because they think it is gross. He then orders them to bury the seeds, but they know a Creep commander would never order them to do that. They now want Ricky to transform into a creep to prove that he is their commander.

Just as it looks hopeless for Ricky, Iris arrives and claims to be commander's assistant. Then she gives them a plan to put the seeds in cookies and give them out at the bake sale. They agree and go to Iris' house to bake the cookies. Iris tells Ricky she saw Wart and the others turn into creeps and that's why she came to help. They decide to make a plan at the bake sale.

At the bake sale, Ricky goes to the podium and tell everybody not to eat the cookies, but the children laugh at his misery when Ricky warns them and start calling him names. He then tries to eat all the cookies but the teasing children start throwing baked goods at him. The Creeps pull him aside and tell him that when the children eat the cookies, they will transform and all of them will become Ricky's slaves. Upon hearing this, Ricky tells the kids to eat the cookies. Then at last, he eats one himself. Ricky thinks about how things are going to change around here, and he can't wait. 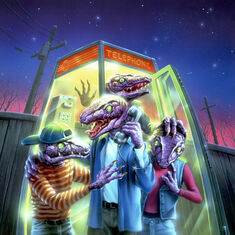 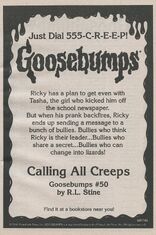 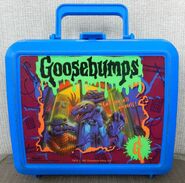 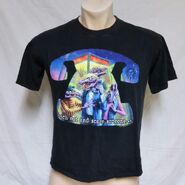 T-shirt (front and back),