"Bride of the Living Dummy" is the sixteenth episode of season three of the Goosebumps TV series, and the sixtieth episode overall. It premiered on February 14, 1998, on Fox during the Fox Kids block.

At night, a man named Jimmy O' James is wandering through a junkyard, and he finds a brown case. It is locked, but just then, a bolt of lightning shoots down on it, and breaks it open. He lifts open the lid and sees a ventriloquist dummy inside. This dummy is named Slappy and he's no ordinary dummy. Inside Slappy's jacket pocket, Jimmy finds a piece of paper. He read the six strange words, Karru Marri Odonna Loma Molonu Karrano. Slappy then appears out of the case and tells Jimmy that he has an offer that he cannot refuse.

Then there is a ventriloquist show with the Amazing Jimmy O' James and Slappy. All of the main human characters are at the show, including Katie's doll, Mary-Ellen. During the show, Slappy sees Mary-Ellen and doesn't pay attention to Jimmy's questions. Later, he makes something up, and everyone laughs.

After the show, Jillian, Harrison, and Katie walk out, but then Katie realizes that she doesn't have Mary-Ellen with her. Then, Jillian tells her to look for her dumb doll back in the seating room, while Harrison and her go to look for it throughout the building. Jillian hears Jimmy and Slappy arguing in the dressing room, and goes to listen in further.

Just then, the door swings open and Jillian almost falls to the ground. Surprised, Jimmy looks over at Slappy and finds that he is back to his doll-form. Jimmy, suspecting Jillian was listening in on him and Slappy, asks Jillian if she liked his new act. He makes up a story about putting motor controls in the dummy. Then Jimmy tries to distract her by asking if she would like an autograph from him. Jillian then walks out to the main lobby, and finds that Katie has Mary-Ellen. Katie explains that she found her "wandering about" looking for Slappy and then got lost. Jillian throws the signed autograph with Slappy on the front in the trash.

At home, Jillian goes to the basement to tell her dad to come up for dinner. He is distracted making wooden bird houses with his cutter, but comes on up. After dinner, a large package arrives in the mail addressed to Jillian. It is Slappy, sent by Jimmy. A letter is inside the suitcase saying that Jimmy knew Jillian was the right new owner for Slappy when they talked that afternoon. Jillian takes Slappy down to the basement and finds that Katie and Mary-Ellen are downstairs as well. Katie says that Mary-Ellen wanted to be with Slappy. Then, Jillian says that dumb doll of hers talks too much. She throws Slappy onto a pillow, and goes upstairs. Then, Slappy raises his head and looks toward the top of the stairs.

At night, Jillian hears the sound of her dog, Kevin, barking, and mumbles for him to be quiet. Slappy encounters Kevin in the hallway. The next morning, Katie wakes up and screams when she sees that Slappy is in their room on top of their dresser. On the mirror, written with red lipstick reads "I want my bride!" Jillian cleans it off and tells Katie that it feels like she's in a psycho toy store. She then decides to take Slappy back to Jimmy O' James.

Jillian's mother calls for the girls and says that her wedding ring is missing. She demands that the girls return it to her jewelry box before she comes home. The girls don't know anything about the ring. Their mother also says that she hasn't seen Kevin, and if he comes home, to take him for a walk. Jillian later takes Slappy's case with her back to the showplace and finds that there is a mess of other broken ventriloquist dolls littering the area. Jimmy tells her that they were Slappy's rivals, and that he destroyed them all. He also states that Slappy is no dummy and that he's pure evil. He says that you can't destroy the evil spirit within Slappy.

Jillian then opens the case to give Slappy back, but Kevin leaps out, and scares both her and Jimmy. Then, Jillian realizes that if Kevin is there, then that must mean that Slappy is still back at her place. Katie and Harrison are watching an old scary movie. Harrison feels sick from eating too much and goes to the bathroom. The phone rings, and Katie answers it. Jillian on the other line explains that Slappy is still there. Slappy interrupts the call and says he wants his bride. Slappy then locks the bathroom door and takes the key, locking Harrison inside. He then cuts off the electricity by flipping the breaker switch.

Jillian arrives seconds later and tries to get Harrison out from the bathroom. Slappy then appears and says that they can run, but they cannot hide. Jillian gets tired of Katie's warnings about Mary-Ellen. She lifts the doll off the ground, and Mary-Ellen asks, "Who are you calling dumb?" Realizing that Mary-Ellen is also alive, Jillian drops the doll. Then Slappy comes and tells them that he stole their mother's wedding wing for his bride. All three girls, including Mary-Ellen think he is talking about Mary-Ellen, but Slappy is in love with Katie.

Mary-Ellen gets mad, and pushes him into the wooden stairs. Jillian jumps up and turns on the power saw, and Slappy throws Mary Ellen into the cutting blade while still holding on to her getting them both cut to pieces. Then, Jillian takes the ring back, and sees the spirits of the dolls float up and leave the room. After her parents come back, they realize that Harrison is still locked in the bathroom. When they unlock it, they find that Slappy's evil spirit had taken over Harrison's body, and Slappy says, "Sorry folks, Harrison doesn't live here anymore!" He laughs maniacally while the family watches on in horror. 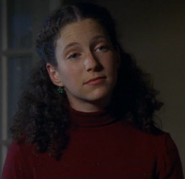 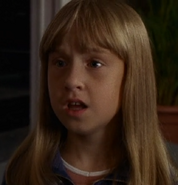 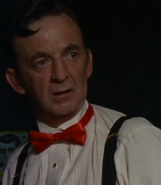 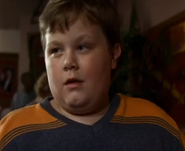 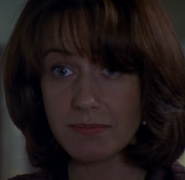 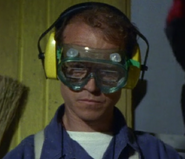 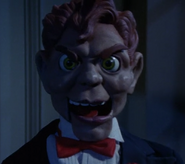 Slappy out of his case after he comes to life.

A black-and-white photograph of Slappy in the trash bin.

Jillian Zinnman with her family and a mystery package.

Jillian takes Slappy down to the basement.

Katie and Mary Ellen in the basement.

Slappy is waiting to attack.

Slappy locks the bathroom door with Harrison inside.

Slappy in the dark basement.

Slappy looking through the vent grid.

Slappy is planning to attack. 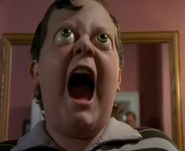