It's a match made in horror.

The cover illustration depicts both Slappy, dressed as a groom, and Mary-Ellen, a bride, raising a large cake server atop a skull-covered wedding cake.

The Classic Goosebumps cover illustration depicts Slappy and Mary-Ellen throwing pieces of wedding cake around while sitting on chairs, rather than standing.

Jillian Zinman's life is a hassle, mainly due to having to deal with her six-year-old twin sisters Katie and Amanda, who always bring along with them Mary-Ellen, a life-size doll that they constantly use to torment her. After she insults the doll, Jillian wakes up in the middle of the night to see her twins trying to cut her hair, claiming that Mary-Ellen told them to. The next day, Jillian's mother tells her to take the twins and Mary-Ellen to the Little Theater for the ventriloquist show. Jillian brings along her best friend Harrison.

The ventriloquist is a man named Jimmy O'James who arrives onstage with his dummy Slappy. Jillian notices that Jimmy looks unhappy, made no better as the act is nothing but Slappy hurling harsher and harsher insults on Jimmy. The pair then ask for some audience participation. Katie and Amanda volunteer, only for them and Mary-Ellen to be hurled even harsher insults. After the show, the twins run off backstage to tell Slappy how mean he was. Jillian and Harrison give chase until Jillian finds Jimmy's dressing room. As she spies on him, she sees Jimmy arguing with Slappy, eventually leading to Slappy slapping Jimmy hard in the face, making his nose bleed. When Jimmy notices Jillian spying on them, he claims that this was all just a routine for the show. Jillian believes him and leaves.

Jillian eventually finds Katie and Amanda and takes the twins to Dairy Queen, where they force her to buy an ice cream for Mary-Ellen. When they get home, Jillian is shocked to find Slappy sitting on the couch. Harrison shows up and mentions that he had found Slappy in the dumpster and brought him home with him, believing that Jimmy must have gotten rid of the dummy. Slappy suddenly bites Jillian's hand, but Harrison assumes that his jaw must be broken. They also find the paper containing the magic words in Slappy's breast pocket. Jillian almost reads the words aloud, but her mother calls them for dinner. Harrison leaves Slappy with Jillian as her father is an aspiring carpenter with his own workshop. After an incident at dinner involving Mary-Ellen, Jillian begins to plan some sort of revenge on her sisters. After a failed attempt, the twins say they want to tell her something important but Jillian doesn't listen out of anger.

Jillian and Harrison head to the local magic shop to buy props for their clown act for an upcoming four-year old's birthday party, as being a clown has been Jillian's longtime passion. The two spot Jimmy O'James exiting the shop. They try to tell them that they have Slappy, but he tells them to get rid of him before it's too late, then runs off. Jillian returns home, having found squirting playing cards for the clown act, but sees that her lizard cage has been broken into and her pet lizard Petey has gone missing, with Slappy near the scene of the crime. She eventually finds Petey in Slappy's mouth. Believing the twins had something to do with it, Katie and Amanda are forced to put Mary-Ellen in the closet, the twins say that this will make her very angry.

The next day, Jillian and Harrison perform their clown act at the birthday party, but everything goes wrong. From bad jokes to empty squirting cards, it just makes the kids unhappy. When they attempt a whipped cream pie prank, things get worse as the cream was replaced with some kind of soap, which injures some of the party-goers. Jillian believes it to once again be the work of the twins and resumes her plan for revenge. She also decides to give up being a clown, as Harrison's proposal of a ventriloquism act interests her more. When she confronts Katie and Amanda about the sabotage of her clown act, they say that they were at a friend's house the whole day, so they couldn't have done anything.

Harrison and Jillian find Jimmy's address in hopes of learning about ventriloquism. However, when they arrive, they find the house abandoned with destroyed and unfinished dummies lying around. They find a diary that mentions the origins of Slappy: he was created by an evil sorcerer who would create evil toys; ones he would use to steal from or injure children. He created his most evil creation, Slappy from the wood of a coffin and then put his evil inside it. The diary mentions the magic words to awaken Slappy, but Jimmy managed to put him back to sleep before abandoning him. Jillian believes that Katie and Amanda may had read the spell and awakened Slappy.

Jillian's parents leave for the night, so she has to take care of Katie and Amanda. When she enters her room, she sees Slappy by the mirror with the words Where is my bride? written with lipstick on the mirror. Jillian tries to see if Slappy's alive, but the dummy doesn't move. After going to the bathroom to calm down, she suddenly hears a commotion downstairs. Jillian enters the dining room to find food and broken plates everywhere with Slappy sitting at the table, the twins in a panic. Slappy disappears again and is then found on Jillian's bed, once again with the words Where is my bride? now written on her wall. Jillian ends up grounded for the mess and tells Harrison that she won't use Slappy for their ventriloquist act, so Harrison replaces him with another dummy named Maxie.

Jillian and Harrison host another birthday party in the basement of Jillian's house. However, when they open the dummy case, they find Slappy inside. They decide to use Slappy and Mary Ellen for their performance instead. Everything goes well until Slappy vomits green slime on the children. Slappy then holds a boy named Eddie hostage, saying that he wants his bride. Jillian thinks he must mean Mary-Ellen, but Slappy rejects the doll, saying that he wants Jillian to be his bride. When she refuses, Slappy headbutts her in the nose, calling it a "love tap." Suddenly Mary-Ellen awakens and starts to fight with Slappy, saying she brought Slappy to life to marry her, not Jillian. Katie and Amanda tell Jillian the truth — that Mary-Ellen had been alive and had enslaved them ever since they first got her, and that she was the one behind all the terrible things that befell Jillian.

Mary-Ellen reveals that she wanted to bring Slappy to life to make Jillian's life eternally miserable. Slappy fights off Mary-Ellen and says that this birthday party will now be a wedding party with Jillian as his bride. The two dolls continue to wrestle with one another until they end up in Mr. Zinman's workshop. Slappy slices Mary-Ellen with the table saw, but she manages to drag him into the saw as well, causing both to be cut in half. Slappy's remains try to attack Jillian, but falls to the ground and stops moving. The parents arrive to pick up their frightened children, but neither Jillian, Harrison nor the twins mention anything about Slappy or Mary-Ellen.

After cleaning up, Harrison reads another passage from Jimmy's diary that mentions how the destruction of Slappy's body doesn't fully kill him and how his spirit can still possess others. Jillian suddenly says she finally knows how to get her revenge on Katie and Amanda. She opens her mouth wide and vomits green slime all over them. 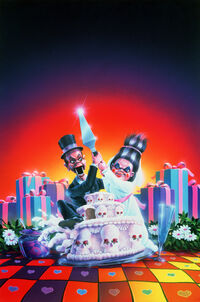 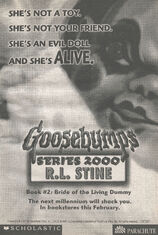 Book advertisement from Cry of the Cat.

GIF based on this book's cover art from the foxhome.com site circa 1998.