Brent Green, also known as The Invisible Boy, is the main antagonist throughout the majority of the fifty-seventh Goosebumps book, My Best Friend Is Invisible, and its television adaptation.

Brent was an invisible boy who first appeared in Sammy Jacobs room, leaving a mess in there. He revealed himself to Sammy and claimed to want to be his friend. However, he soon proved to be an annoyance to Sammy as he appeared at his school and his attempts to help Sammy, such as answering a math question for him, only embarrassed him and made it look like he was crazy.

Sammy was able to get rid of him by turning the heat in his house up. When Sammy went to a legendary haunted house known as Hedge House with his friend Roxanne Johnson as part of a English project, and they were seemingly attacked by a ghost. However, it turned out to just be Brent playing a joke, hoping the footage they got would help them out.

Sammy got out a special light his parents had made, hoping it would expose Brent to his family. This worked, but Brent was revealed to be a human, instead of the two-headed alien creatures that everyone else is. Brent was turned invisible his parents so that he could survive. Sammy wanted to keep him despite this, but his parents instead decide to send him to a zoo, as humans are an endangered species.

The episode explains that the aliens had taken over Earth, and while most humans were taken to the space colonies, Brent managed to escape and his parents made him invisible so he could survive. The Jacobs soon ganged up on Brent, leaving his fate unknown.

Brent Green appears in the 2015 Goosebumps film voiced by Jack Black, but referred to and credited as the Invisible Boy. He suddenly appears on the windshield to R.L. Stine's car leaving noticeable hand prints. He climbs around the car and hits Champ in the face. Stine removes him by accelerating the car really fast then comes to an immediate stop flinging him from the car. He replies by shouting "Not cool!".

At the end of the film, he reveals to Stine that he somehow evaded getting captured by beginning a story titled The Invisible Boy's Revenge on Stine's typewriter and leaves hand prints on the trophy case as he tells Stine, "You forgot about me!" Stine screams in horror as Brent's hand print appears on the cabinet glass while Brent maniacally laughs. The image is then turned into a book cover with the tagline "Invisible but deadly."

Invisible Boy not getting sucked up by the book as a plot hole could be seen as a plot hole due to Zach Cooper writing "all the monsters go back into the book." His ability to escape entrapment is never fully explained. It's possible that he was about to be captured near the end of the film but managed to escape once Champ abruptly closed the book.

His final fate is unknown. He is presumed still at large or captured off-screen before Goosebumps 2: Haunted Halloween.

Brent Green's hand prints as seen in the film.

Brent Green's hand prints as seen on the cover of The Invisible Boy's Revenge. 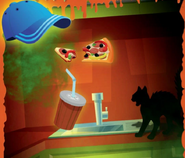 Brent as depicted on the Iceland translation of My Best Friend Is Invisible.
Community content is available under CC-BY-SA unless otherwise noted.
Advertisement