Return to HorrorLand
Brain Juice is the twelfth book in the Goosebumps Series 2000 book series. It was published in 1998.

The cover illustration depicts a brain with strange, purple liquid being poured onto it.

Two aliens, Morggul and Gobbul, have landed in Maplewood, New Jersey looking for strong and smart humans to serve as slaves on their planet. They are hiding in the house of Dr. Frank King, as they think he is king of the scientists. But he is not as smart or as strong as they want.

Frank's nephews, Step-siblings, Nathan and Lindy Nichols come to visit him. They tell him that they are mocked for being the stupidest kids in school. They study constantly but always get low marks, and were unable to build a dollhouse for their younger sister Brenda. They believe Frank can help them become smarter. He gives them a concoction called "Brain Juice', which is actually just grape juice. He believes that if they think they are smarter, it will boost their confidence. Morggul and Gobbul see this and replace the grape juice with Brain Energizing Fluid, which will make the kids smarter so they can become fitting slaves.

At first it doesn't seemed to have worked, but eventually it kicks into high gear. The teacher even believes they have cheated on a test because of how well they did. They start correcting the teacher in class and start annoying the class by flaunting their newfound intelligence. Even their friends refuse to hang out with them, believe they are freaks. They upset their peers so much that they are expelled for being too unnaturally smart.

Following their expulsion from school, Nathan and Lindy are soon hounded by news anchors who are reporting the controversy over the two being kicked out of school, agents who want to make them famous, and government scientists who want them for experiments. After a while, Nathan and Lindy get so terrified at the thought of being famous.

Back home, it's revealed that Nathan and Lindy were only pretending to be stupid so they won't be slaves to the alien emperor and must keep pretending to be stupid in order to return to their normal lives. They tell Frank what happened, and make him swear to never tell anyone about the aliens. Frank then reveals he has been drinking the same brand of grape juice he gave them, 8 times a day. 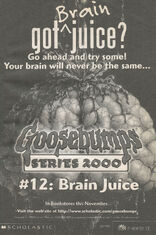 Book advertisement from Attack of the Graveyard Ghouls 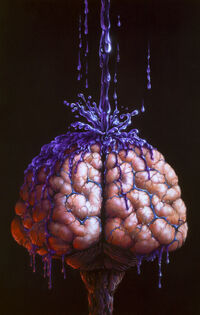