One boring afternoon in Pitts Landing, his home town, Bird and his friends Greg Banks, Shari Walker, and Michael Warner dared each other into exploring the Coffman House, an old abandoned house reputed to be haunted, and believed to be occupied by a creepy old homeless man known to the local kids as "Spidey". When they went into the basement, Greg accidentally uncovered a secret compartment in the wall from which he took out a strange camera, the kind that snaps instant pictures.

He used it to snap a picture of Michael posing on the basement stairs, when suddenly the railing gives way and his friend takes a nasty fall. Luckily Michael came off with only a sprained ankle, but then the friends heard Spidey returning, and they just barely escaped in time before he caught them. It is then that Greg realized that he still had the camera, but neither he nor any of the others were willing to go back to return it. Then he notices the picture he has taken with it depicts Michael falling through the stairway railing, which happened after the picture was taken, not during. Both Bird and Michael insist that he must have taken the picture during the accident.

Later in the story, Greg goes to his friend Bird's baseball game; a picture of Bird is taken and the picture depicts him lying on the ground with his neck bent in an unnatural angle. Bird dismisses this idea and even fakes the picture's scene coming true, in an attempt to show Greg and Shari that the camera is simply broken. However, while playing the game he is hit by an oncoming baseball. In fact, he lands in such a way that his neck is bent into the unnatural angle. Now, Greg is convinced that the camera is somehow responsible, but his friends are still unwilling to believe these ideas.

Despite their initial disbelief, Bird and Greg's other friends eventually find out that the camera really is evil.

Greg Banks recounted the story of his encounter with the Camera as an essay for his English class, which he needed to pass in order to visit his cousins in Yosemite, California. But his mean teacher, Mr. Saur, refused to give him a passing grade, as he insisted that the essay had to be based on a true experience, and of course he didn't believe Greg's story about a camera that can predict the future. Despite the advice of Bird, Shari, and Michael, Greg decided to visit the Coffman House once more and retrieve the Camera to show Mr. Saur, hoping that by proving that it really can predict the future his teacher will have to pass him. After Greg's picture is taken by Shari, he swells to over 300 pounds. This earns him mockery by not just Mr. Saur, but Bird and Michael.

Bird is a real joker, who never fails to make his friends laugh, even when he is making fun of them. He is also very playful and is always willing to play whatever game he and his friends are playing. Bird can also be somewhat childish and immature, as he usually has his food smeared all over his face and playing the dumbest jokes on his friends. He also makes fun of Greg for being sensible, but Bird isn't really as brave as his friend and he is also ignorant and not very bright. But Bird is still a good person and a loyal friend. He actually doesn't like being called Bird, but he is used to it.

Bird has his nickname because he looks bird-like. He has long legs, beady eyes, and a beak-like nose. Bird also has brown hair and brown eyes. 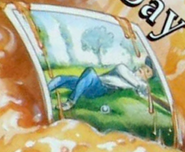 Bird as depicted on the UK cover of Say Cheese and Die!.

Bird (left) as depicted on the original version of the Curious Camera Topps trading card.

Bird (left) as depicted on the final version of the Curious Camera Topps trading card.