Kaj-Erik Eriksen
Billy Harlan is the protagonist of the ninth book in the Goosebumps series, Welcome to Camp Nightmare, and its accompanying television adaptation.

Billy's parents, two scientists, have sent him to spend a portion of his summer at Camp Nightmoon.

When Billy gets there, a lot of scary things start to happen. As soon as the campers arrive, they are almost attacked by wolf-like creatures. Mike, one of the campers, is bitten by a snake and is told that there is no nurse at the camp. Larry, Billy's bunk counselor, seriously injures one of the campers during a game of scratchball. Over time, many campers start disappearing.

One night, Billy is awoken by Larry unexpectedly. Larry guides Billy into the woods, and they find a group of boys and Uncle Al, the camp's leader.

Uncle Al provides the boys with tranquilizer rifles. He says that two campers have escaped from the girls' camp, and the boys will have to hunt them. Billy refuses to hunt for the girls. When Uncle Al leaps at him, Billy fires his rifle at him. However, Uncle Al laughs and says that Billy passed. All of the missing campers and Billy's parents emerge from the woods. Uncle Al explains that he has been the subject of a government test. Billy's parents, two scientists, will be going on an important trip, and they want to take Billy with them. Because of his age, Billy needed to pass certain tests in order to gain clearance to go. Because of his bravery and logic, Billy passed all of the tests. Billy's parents will be venturing to a far away planet to investigate the creatures that live there. The planet is called Earth.

Billy is a brave and responsible boy, often doing what he can to follow the rules and help others. He's also loyal to his friends and will do what's right, even if it goes against camp rules, case in point when he goes against hunting Dawn and Dori. 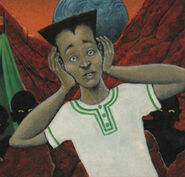 Billy as depicted on the 1st French cover of Welcome to Camp Nightmare.

Billy as depicted on the Dutch cover of Welcome to Camp Nightmare. 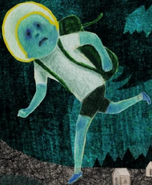 Billy as depicted on the Korean cover of Welcome to Camp Nightmare.