Tod Fennell
William "Billy" Deep Jr. is the protagonist of Deep Trouble, Deep Trouble II, and Creep from the Deep. He is the older brother of Sheena Deep.

Billy and Sheena Deep are spending their summer vacation on the Caribbean island of Llandra with their uncle named Dr. Deep who goes simply by Dr. D. While snorkeling, Billy is nearly attacked by a Sea Monster and manages to get away. Dr. D's assistant, a muscular graduate student named Alexander DuBrow, serves up lunch to the children: chicken salad sandwiches.

Only his cooking's terrible, so Dr. D offers to grill some fish for dinner. Billy overhears a private conversation between Dr. D and representatives for the Marina Zoo. The zoo crew wants Dr. D to find and trap a mermaid that has been reported in the area. The zoo offers Dr. D the princely sum of one million dollars.

Billy is too excited to sleep, so he goes out early the next morning at 6:30 AM to search for the mermaid. Billy's night swimming is suddenly interrupted by a hammerhead shark that almost kills him. Fortunately, the mermaid comes and attacks the shark, saving Billy's life. Dr. D nets up both Billy and the mermaid and drags them onto the deck of the ship. Billy tries to argue that the mermaid saved his life. But the mermaid is put into a large glass tank on the deck until the zoo crew arrives. Billy is enjoying dreams of Sea People when his slumber is interrupted by the sound of crashes and a splash. Above deck, he discovers the mermaid is in the process of being kidnapped! The men brutally toss Billy into the tank. Billy starts yelling for Alexander as Dr. D is knocked out on the floor and Sheena is offering no help against the four burly men. Finally, Alexander does show up only to side with the thugs.

The thugs toss Sheena and Dr. D into the tank, lock it, and then throw it into the water. The top of the tank is meshed, so the three characters inside the tank fight to break the locks before the tank submerges completely underwater. As they struggle, the "kidnappers" and Alexander speed off with the mermaid in tow. Just when things look their worst, a myriad of mermaids appear and hoist the tank above the water level. Dr. D and the children break open the latches and escape to the dinghy. As the other mermaids rescue her, the thugs attempt to set fire to Dr. D's dinghy. The mermaid is set free. Billy sneaks out by the coral again in hopes of catching the mermaid to say goodbye.

When Billy is searching for the mermaid, he is attacked by the Sea Monster which he encountered in the beginning of the novel.

A year after the previous books events, Billy and Sheena Deep are back with their uncle for another summer vacation in the Caribbean. The books previous events are explained to the reader, with this one officially opening with Billy tickling a "ferocious octopus," which then turns out to actually be Sheena, who was getting tickled. Wanting to play a trick on his sister, Billy then grabs a gray pillow from the deck of the boat. He decides he will swim underwater with the pillow partially sticking out so that Sheena will think it is a shark!

This plan backfires, when a real shark shows up. The shark chases both children onto the boat and begins to attack it. Their uncle runs out and asks about the noise, but when the two children mention the shark he is skeptical and asks if they just weren't being chased by some child with a gray pillow.  Billy and Sheena's uncle leads them to an office on his boat to look at a new large mystery fish he has captured. Dr. Deep and the children thumb through some science books until one of them makes a shocking science discovery: the giant fish is positively identified as a minnow, an animal that, like Hedwig, has a maximum length of one inch...

Billy spots some plankton samples that Dr. Deep has gathered and snags some to feed his goldfish. But when Billy is about to feed his fish, he is shocked to discover a human head inside of the goldfish bowl. Sheena reveals that the human head is actually a doll's head and Dr. Deep explains that the water in the fishbowl made the small doll head appear as large as a human head.

Due to earlier, Billy has soon turned obsessive in getting his sister back with her prank. In the water the next morning, the two go swimming and Billy cries out, "Shark!" Sheena fails to fall for this as he is not holding a gray pillow. But the joke is on Sheena, as she gets sucked into a giant jellyfish. Billy tries to reach out for her and pull her out. He goes into the jellyfish and manages to safely get away with Sheena. The two escape and the jellyfish swims away to fight another giant fish.

Once safely back on the boat, they can't seem to find their uncle. They then eventually find him covered in foam underneath a giant snail that somehow found its way onto the boat. Before everyone can piece together that the giant snail aboard the ship is the very same one from Billy's fishbowl, more things soon begin to happen. The boat suddenly jostles to one side as something immense weighs down the other end. When the trio go to investigate, they spy Billy's pair of goldfish who are now the size of small whales and nearly capsizing the boat with their immense weight. The three main characters wrestle with the giant fish and heave them off the boat.

To make matters worse, three unpleasant men show up on the boat and the head man introduces himself as Dr. Ritter, then asks the trio if they have seen anything unusual. Dr. Deep tries to lie, but then Billy blurts out about the giant goldfish. No matter how hard he tries to make up a lie instead, Dr. Deep cannot convince the other men and Dr. Ritter sends one of his henchmen to investigate the ship and the giant snail is discovered.

Dr. Ritter then begins to inform them of the special magic plankton using science to make fish bigger in hopes of helping end world hunger. But he then makes it clear that he cannot let the children live. Billy starts to protest, but Dr. Ritter silences him. He is side-tracked soon after, when Sheena notices a bunch of seagulls, who are now titanic from eating the plankton. The birds manage to distract the evil scientist and his henchmen, allowing the children and uncle to escape on a lifeboat.

Soon, however, they find themselves lost at sea, but luckily come by a small island that has been abandoned for quite some time. But, as they have no choice, they try to make the best of it. Sheena shows them that she managed to catch a silver-colored fish. Soon, two dolphins wash up on shore, but they get tangled up in a rope hanging from the lifeboat. The three hop onto the boat and are taken on a wild dolphin-driven ride through the sea! Somehow they manage to get back to their boat, only to find that Dr. Ritter has taken up residence, then greets them before escorting them into Dr. Deep's lab. He continues to reveal the information about his plankton, such as the serious side-effect that comes with it: whenever it is ingested by a human, the human turns into a fish for life! He then forces Billy to choose one of the bottles of plankton and drink the contents. Billy attempts to distract him by turning around and messing with some pillows to give the impression of having turned into a fish. But Dr. Ritter forces him to drink the potion. Billy does, but he does not turn into a fish.

Dr. Ritter grows frustrated and a fight breaks out between the two scientists. Dr. Deep tries to hold Dr. Ritter down on the deck of the ship but he breaks free, grabs some plankton, and swallows it before Dr. Deep can call the police. Dr. Ritter then proceeds to transform into a fish and leaves, swimming away...

Sheena asks Billy why he did not turn into a fish, which he explains that he pretended to drink the plankton. Earlier, he managed to throw out the plankton from one of the bottles and then he replaced it with iced tea. Sheena begins to laugh because she apparently did the same thing! She planned to prank Billy in the same way. She then picks up another bottle and drinks the contents, though she is suddenly unsure if she picked the right one.

Creep from the Deep

Billy is a good-natured kid with a wild imagination, often pretending to be a great deep sea explorer like his uncle Dr. D. In Creep From The Deep, Billy gives himself the nickname of "The Undersea Mutant."

Billy as depicted on the UK cover of Deep Trouble. 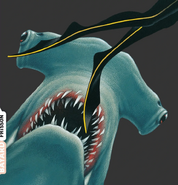 Billy as depicted on the French cover of Deep Trouble. 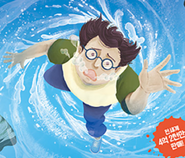 Billy as depicted on the Korean cover of Deep Trouble II.