Beware, the Snowman is the fifty-first book in the original Goosebumps book series. It was first published in 1997.

The cover illustration depicts a scar-faced snowman wearing a red scarf near a mailbox. The snowman has an evil expression on its "face," and its arms are curved up menacingly.

Jaclyn DeForest lives with her aunt, Greta. Jaclyn's mother died when she was young, and she never knew her father because he disappeared after she was born. While moving to their new house in Sherpia, a small village on the edge of the Arctic Circle, Jaclyn remembers a poem that her mother used to read to her:

When Jaclyn arrives at her new house, she sees a snowman standing in her yard. Jaclyn and Aunt Greta unpack. After they're finished, Jaclyn goes exploring. She meets a local boy named Eli and his sister, Rolonda, both of whom seem nice. When Jaclyn expresses a desire to climb one of the nearby mountains, the siblings become distressed, warning her not to go near the mountains. Eli and Rolanda leave shortly thereafter. Jaclyn finds that there are many near-identical snowmen scattered around the village. Made curious by the siblings warnings, Jaclyn begins walking along the road up the mountain. Jaclyn sees a cabin. She knocks to see if anyone's home, but the door slowly swings open. She looks inside to see if anyone is home, but she is tackled by a ferocious wolf. The wolf, named Wolfbane, is called off by an intimidating man with a bushy white beard.

That night, Jaclyn sneaks outside. She feels like she's being chased, so she goes back in. When she lies down, she hears a whispered voice warning her about the snowman. The next day, Aunt Greta assures Jaclyn that the whispers were just a dream. Jaclyn foes outside and gets caught in a snowstorm, and she's found by Rolonda. The kids head inside of a local church. Rolonda begins explaining the backstory of the snowman. Many years ago, a male and female sorcerer lived in their village. The sorcerers brought a snowman to life, but they lost control of the creature. The snowman tried to destroy the town. The village residents rally together to chase the snowman to the top of the mountain. Now, all of the residents build snowmen in the hopes of pacifying the evil snowman.

Jaclyn is skeptical of the story. Jaclyn walks Rolonda home. After Rolonda is inside, Eli approaches Jaclyn and tells her that he saw the snowman. Jaclyn goes home. While looking for her aunt, she finds a cold puddle on the floor. Aunt Greta returns home, and Jaclyn tells her she was worried that a snowman had broken in. Aunt Greta reassures Jaclyn that the snowman is only superstition. The next day, Jaclyn goes outside and meets Eli and Rolonda. Jaclyn tells them that she wants to go to the cave at the top of the mountain. The siblings refuse to go, but they agree to distract Conrad for a long enough time to allow Jaclyn to get up to the cave.

Eli and Rolonda talk to Conrad. This gives Jaclyn climbs the mountain. From the mouth of the cave, Jaclyn sees the snowman. The snowman demands to know who the girl is, and she replies honestly. Upon hearing her name, the snowman says that he's her father. The snowman tells Jaclyn that her aunt is a sorceress, and cursed him to stay in the cave. Since the spell only lasts ten years, Aunt Greta had to return to Sherpia to renew the spell. The snowman says that the key to his freedom is clued in the second verse of the poem that her mother used to read to her.

Aunt Greta suddenly appears and tells Jaclyn that she had been the one whispering warnings to the girl. She knew about the snowman the whole time, and she says that the snowman is not Jaclyn's father. The sorcerer and sorceress from Rolonda's tale were Jaclyn's real parents. Aunt Greta has a copy of the full poem that her mother used to read, and she tries to throw the piece of paper off of the cliff, but Jaclyn catches the page. Jaclyn manages to see the full poem before her aunt can take it. Jaclyn recites the missing verse. The poem says that when it becomes warm, the snowman will go free.

The group begins to leave the mountain, but, before they can, they are surrounded by the snowmen that Conrad brought to life. One snowman walks forward and asks if they can head back down to the village, as it is cold on the mountain. 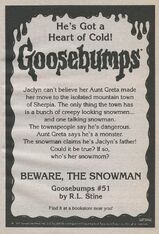 Book advertisement from Calling All Creeps!. 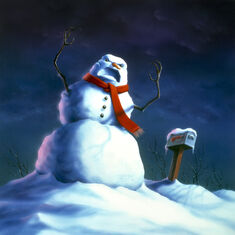 This book's trading card found in book #50 Calling All Creeps!
Add a photo to this gallery

Retrieved from "https://goosebumps.fandom.com/wiki/Beware,_the_Snowman?oldid=114488"
Community content is available under CC-BY-SA unless otherwise noted.