Not to be confused with the Beast from Escape from Shudder Mansion.

Green or Grey (The Beast from the East)
Black (book cover, games)

The Beasts are creatures living in a strange forest that appear in the forty-third Goosebumps book, The Beast from the East.

Ginger Wald and her brothers Nat and Pat encountered these creatures after they got lost in the Beasts' forest. Pat managed to run away, but Ginger and Nat were caught by the Beasts and forced to play their game, The Beast from the East. In this game, the player chosen as the Beast from the East must tag another player, who will become the Beast of the East, before the sun sets behind a tree called the "Gulla Willow", and the loser will be eaten. Furthermore, if a player steps on a brown square of ground called Free Lunch Square, they can be eaten by anyone, the Beast of the East can only "attack" from the East, and all players must be at least three feet tall.

Minutes later, Ginger and Nat fell in a nest of snakes. Fleg, the leader of the Beasts, a Beast with bald spots in his fur, rescues the and informs them that they won 20 points and that they can win 60 points if they are bitten. He then delivers them by tickling the snakes and run away.

Soon after, Nat notices Beasts after climbing a tree (and almost being eaten by said tree). They try to sneak on them and tagging them, but they disappear, until Nat touch a big boulder, that was actually a Penalty Rock. Gleeb, one of the Beasts takes Nat for his penalty and Ginger learns that she won 50 extra points because of colours she gathered accidentally by touching trees and rocks. Nat is the locked in the Penalty Cage until the end of the game, when he will be eaten (or until he eats a tarantula).

Ginger fell on a Free Lunch Square, but was saved by a cloud hiding the sun. She then tried to tag a Beast, but found out it was the baby, and therefore under three feet tall. She then tricked Spork, a one-eyed Beast babysitting the baby, into playing Freeze Frame, and then tagging him from the east (she previously tagged him from the west and failed). Fleg and Gleeb then arrived and told her to start running.

The Beasts chased Ginger, who ran into Pat, until they hid in the Hiding Cave, full of bugs, helped by an hybrid of squirrel and dog. The squirrel-dog lied to Fleg and Spork and told them there were only bugs in the Cave.

Ginger and Pat then hid behind a rock near the Gulla Willow (without touching it) until the sunset and celebrated their victory, but Spork tagged Ginger and then only Fleg closed the game. They then decided to eat Ginger and Pat, who was considered as a Helper, but they then discovered Nat, who broke out of the Cage and thought that Nat and Pat did a Classic Clone, since they are identical. Since only Level Three players can perform a Classic Clone and Fleg and his crew are only Level One, and can only play in the daytime, they let the Wald kids go, and tell them how to find the human world. On their way, they meet a gigantic Beast with marble grey eyes. The Beast says he is also a Level Three player, and tags Ginger.

The reader can encounter an unseen creature with a deep voice in a cave while at the Fun Zone. The creature is unseen due to being in the darkness, and will only allow the reader to pass if they answer three questions, the first two are answered by the reader's character, but the third is presented as a choice in the book, which is "What color is the Beast from the East?". If the reader answers incorrectly the creature is revealed to be a Beast, and the reader is apparently eaten. The correct choice appears to contradict this, however, as while the identity of the creature is not shown, it stated that it may have been a giant cat.

A Beast appears as an enemy in Goosebumps: The Game. The player must get pass the Beast to dig out the security card. To do that, the player must use the talisman or Shrunken Head, and it will overpower him. Alternately, if the player has The Haunted Mask yet does not wear it once yet, the mask will frighten the Beast upon the player removing it.

The Beasts are 8-foot-tall koala-like creatures with blue fur, green eyes, narrow pointy bear-like heads, pointy ears, long snouts, two rows of sharp yellow fangs, primate-like bodies, and long beaver-like tails. The younger ones, such as the baby, have a brighter fur and are under three feet tall. The bigger Beasts seem to have marble grey eyes, and to have the ability to duplicate themselves, an ability called "Classic Clone".

The Beasts spend their time playing a deadly game of tag, The Beast from the East, in which the loser is eaten. It is also apparent that the better a Beast is at playing the game, the more abilities they are able to perform. Beasts are honor bound by the rules of their game, but more than willing to exploit loopholes to win.

A beast as depicted on the French artwork for The Beast From the East. 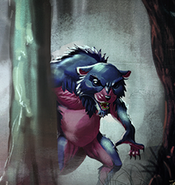 A Beast as seen in the "Beast Beneath the Sink!" loading screen in Goosebumps HorrorTown. 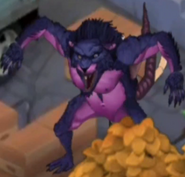 A Beast spawn in Goosebumps HorrorTown. 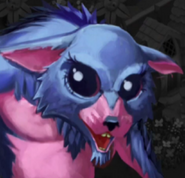