Be Careful What You Wish For… is the twelfth book in the original Goosebumps book series. It was first published in October of 1993.

The illustration shows Samantha Byrd in front of a crystal ball as Clarissa's hands are visible.

The 2005 reprint shows Clarissa on a porch in the rain. The 2009 reprints shows Clarissa's head in a crystal ball in a fortune teller's tent.

Sam's mother wakes her up the next day. Sam happily goes to school. When she sees Judith, she's shocked to find that Judith has cut and died her hair to be more similar to hers. Judith follows Sam continuously throughout the day. Sam becomes annoyed with Judith's antics. When Sam goes home and tries to go to sleep, she finds that Judith has sneaked into her room. Sam forces Judith out of her house. The next morning, Sam goes outside, but she is chased by Judith. Sam runs into the woods, where she is met by Clarissa. Seeing that Sam is unhappy, Clarissa offers Sam an extra wish. Sam wishes that Judith had met Clarissa instead of her.

Diary
Add a photo to this gallery

Be Careful What You Wish For... was adapted into an episode of the Goosebumps TV series. It is the first episode of season two. 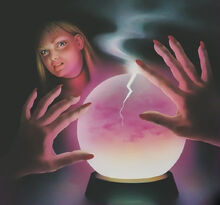 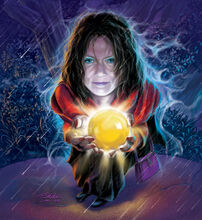 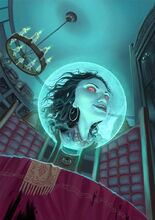 Retrieved from "https://goosebumps.fandom.com/wiki/Be_Careful_What_You_Wish_For...?oldid=124326"
Community content is available under CC-BY-SA unless otherwise noted.