There's a new beast on the block...

The Haunted Car
Be Afraid — Be Very Afraid! is the twentieth book in the Goosebumps Series 2000 book series. It was published in 1999.

The cover illustration depicts Sparkles wandering through a neighborhood, also facing the reader, with flames inside its mouth.

It's summertime, and twelve-year-old Connor Buckley is bored. Unable to think of anything more interesting to do, Connor and his close friend, Emily Zinman, visit a yard sale. The sale is being hosted by Mr. Zarwid, a local man with a reputation for being strange and bitter. While there, an angry Mr. Zarwid accuses the children of being thieves. Before running back to his house, Connor retaliates by stealing a deck of cards. When the friends arrive back at Connor's house, they begin examining the deck. Connor's friend Kyle Boots stops by and recognizes the cards as being a part of a role-playing game called Be Afraid. The kids begin playing, but they see Mr. Zarwid appear at Connor's front door. The kids talk to him, and he asks if they know what happened to his cards. Connor lies and says he didn't steal anything, and Zarwid warns him that the cards are dangerous.

As the kids continue to play, and Connor acquires knights and uses them to raid a castle. Unexpectedly, a dwarf-like creature from the game, a Krel, appears in real life and scampers off, saying that it is “free as a bird”. The game is interrupted by Connor's parents, who hint that something strange has happened next door. Connor goes out to check, and he sees that the house next door has been attacked. Connor hears the owners mention knights on horseback, reminding Connor of Be Afraid. Mr. Zarwid approaches Connor and asks him if he has anything to confess, but the boy doesn't admit anything.

The next day, Connor's friends insist on continuing the game, despite his objections. Emily draws the cards needed to become a dragon. Kyle teams up with Emily, and they capture Connor's character, intending to finish him off. The kids hear a roar. When they check outside, they see a massive dragon. Connor ends up desperately sliding all the cards back into their box, causing the dragon to disappear. A card falls out of the box. It depicts a wizard that looks like Mr. Zarwid. As Connor tucks the card into his pocket, the kids realize that "Zarwid" is an anagram for "Wizard." The kids go to return the game, but Mr. Zarwid insists that the children have learned too much, and he uses magic to cast them into the world of Be Afraid. The kids are captured by hunters known as Jekels, but they escape. Sadly, they're attack by Stelks, large plant-creatures. The reader is met with a message, saying:

YOU FINISH THE STORY.

Mark is upset because his book, Be Afraid, doesn't have a proper ending, so the boy doesn't get to learn what happens to Connor and his friends. The story has instructed Mark to finish the story himself. Although, Mark unintentionally finds a deck of cards tucked into the back of the book. Mark's sister Amy spreads the cards out and flips one over. The kids are quickly transported to a mysterious field. Mark deduces that they've been transported into the game, but figures they can return home by locating the cards and putting them back in their package. The kids start walking, but they become ensnared in a net.

The siblings are retrieved by a pig-creature, but they escape before it can harm them. As the children run away, they run into Connor, Emily, and Kyle. After a short time, the five kids are cornered by Krell on the edge of a cliff. Mark suddenly remembers that Connor tucked a card into his pocket. Mark guesses that destroying the card might send them home, but wind blows the card out of Connors hand and over the cliff. Mark jumps after it and rips it to pieces while falling. The reader is met with another message, saying:

YOU FINISH THE STORY.

A boy named Ross complains to his friend, Brenda, that the book he bought from a garage sale has no actual ending. Ross goes to the house of the man who sold him the book. The old man agrees to exchange the book and gives Ross a deck of Be Afraid cards. Ross thanks the man by name, calling him Mr. Wardiz, unaware that this is also an anagram for "Wizard." 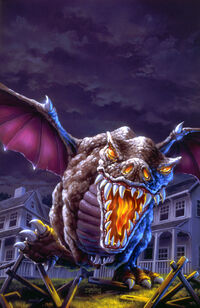