Red
The Balloon Spider is a giant spider-like monster made of balloons featured in the film Goosebumps 2: Haunted Halloween.

The spider reappears during Sarah's fight with Slappy, apparently destroying one of its legs when it tried to stab Sarah. After Sarah triumphed over Slappy, she began using Haunted Halloween to suck in the spider. It's unsuccessful at first until the book absorbed Slappy's magic from the Tesla Tower.

The Balloon Spider standing outside Mr. Chu's house as a Halloween ornament. 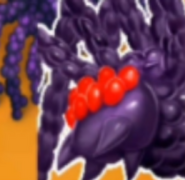 The Balloon Spider as it appears in Goosebumps HorrorTown.