"Attack of the Mutant"

"Bad Hare Day" is the fourth episode of season two of the Goosebumps TV series, and the twenty-third episode overall. It premiered on September 14, 1996 on Fox during the Fox Kids block.

"Pick a card, any card," says Tim Swanson, an amateur magician who loves to perform magic tricks, especially before an enthusiastic audience. Someday, Tim hopes to be a real magician, as good as his idol, Amaz-O. But when Tim goes to Amaz-O's magic show and participates in a disappearing act, he decides his hero is a total jerk! Tim steals Amaz-O's secret bag of tricks, but he gets more than he bargained for — Amaz-O's bag of tricks is full of live fluttering doves, hissing snakes... and one very angry rabbit!

Tim Swanson and his friend Foz enter the shop selling magic equipment for performance tricks and are given two tickets for Amaz-Os show by the shops owner Malik. Foz can't go because his parents won't let him, since the show starts late at night, but Tim decides to sneak out of the house. He is caught by his sister Ginny who threatens to tell on him unless he lets her go with him. They go to the show and as they're watching it, Amaz-O asks for a volunteer to perform a disappearance trick on and picks Tim. Tim enters a box on stage and falls through a trap door to the basement and the trick is successful, however, Tim gets stuck in the basement and can't get out until the show ends. As he's about to leave, he notices Amaz-O's dressing room and decides to tell him about the basement, but hears a voice from the room telling him to get lost. Disappointed, he steals his magic kit. The next day, him and Ginny open the box and Ginny disappears after using the magic curtain. A white rabbit appears and tells Tim his name is El Sydney and that Amaz-O had trapped him a long time ago when he was still a kid after he gave him a magic wand he had found. He says Amaz-O was his idol and asks Tim to help him find his wand again. Tim agrees and they go back to Amaz-O's place from before. They find the wand and Tim manages to bring Ginny back, who threatens she's going to tell on him and leaves, and free El Sydney. Tim gives El Sydney his wand back right before Amaz-O walks into the room. He recognizes Tim and thanks him for finding his magic kit. Tim confronts him about the rude behavior earlier in the dressing room, but Amaz-O claims he never talked to him after the show. He warns Tim about an evil magician named El Sydney and says he turned him into a rabbit for the sake of everyone's safety. At that moment El Sydney appears again, this time with the magic wand, and turns Amaz-O and Tim into rabbits. The episode ends with El Sydney performing a decapitating trick on the two rabbits and asking for a volunteer. 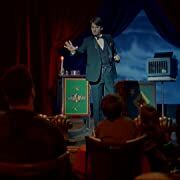