The cover illustration depicts a vicious, white rabbit emerging from a top-hat. Tim Jacobus' trademark signature is found on the floor.

PICK A SCARE. ANY SCARE.

Trick cards, floating scarves, disappearing doves. Tim Swanson loves magic tricks. Someday he wants to be a real magician. Just like his all-time favorite hero, Amaz-O. But then Tim goes to Amaz-O's show. And he finds out his idol is a total grump. That's when Tim decides to steal the bag of tricks. Amaz-O's bag of secret tricks. Scary tricks. The one with the multiplying red balls. And all those hissing snakes...

Tim Swanson wants nothing more than to be a magician like his idol Amaz-O, but his bratty younger sister, Ginny, keeps ruining his act. While performing tricks for his classmates after school, she reveals to the audience the secrets behind his magic. Tim tries his best to shoo his sister away, but the audience seems more amused at Ginny than his act. One girl calls Tim a fraud, and his classmates all depart.

With the show brought to an abrupt end, Tim heads out with his best friend Foz Martin to his favorite magic shop in hopes of finding something that could mix up his act. Sadly, everything in the shop is too expensive. Mr. Malik, the owner of the store gives Tim two free tickets to Amaz-O's upcoming magic show at Midnight Mansion, a local nightclub. Tim is overjoyed at the idea of getting to meet his idol in person and rushes home to ask his parents if he can go.

To his disappointment, both of his parents say no, as the show takes place late on a school night. Tim, however, doesn't let this stop him, and he decides to sneak out to Midnight Mansion, determined to meet his idol. Before he can successfully leave, Tim is stopped by Ginny who begs to come along with him, or else she'll tell on him. Tim reluctantly agrees, and the two depart on their bikes.

Tim and his sister successfully enter the club and are seated right in front of the stage. Tim is overjoyed when Amaz-O appears and begins to look right at him. The magician tells Tim he is going to be chosen as his lucky volunteer in the show's disappearing act later on. Amaz-O begins his show, and the audience is amazed at his tricks. The time for the vanishing act arrives, and Tim steps up to the stage.

Tim is placed inside a large cabinet. As Amaz-O spins it, he falls through a trapdoor into the basement of the mansion. He waits for someone to bring him back, but it never happens. He wanders down a long corridor and comes across the Amaz-O's personal box of tricks. He eventually stumbles upon what looks to be the magician's dressing room. Hoping to find out the secrets behind his tricks, Tim knocks on the door, but is taken aback when Amaz-O shouts at him to get lost. Tim can hardly believe how rude his idol is and, to get back at him, steals the box of tricks.

Tim departs with the box, his sister in tow. Ginny immediately realizes he stole the box and asks her brother to share it with her, or else she'll tell their parents he forced her to go. The two arrive back at home safely, their parents still sound asleep, and unaware their children snuck out. Tim hides the box in the attic, but not before he takes a look inside. The box is filled with a variety of tricks, including mechanical glass snakes that seem almost alive.

When Saturday comes, Foz arrives to see the magic tricks Tim's been working on. Tim starts the show, but his acts all seem to go wrong. He tries to perform the shell game, but balls keep appearing out of thin air beneath the shells. He tries to make doves fly out of a hat, but they come out in swarms. Eventually, the attic is covered in red balls and doves. Annoyed with her brother, Ginny looks around in the box and pulls out a carrot. She takes a bite and is turned into a rabbit. Tim tries his best to revert her back to normal, but nothing works.

He decides the only person who can help them is Amaz-O, and he and Foz head out to Midnight Mansion. They reach his dressing room only to discover the magician is simply a wooden dummy. Suddenly, a voice is heard in the room, and they turn to see Amaz-O's rabbit talking. The rabbit reveals that he is the true Amaz-O. He says that long ago, a sorcerer by the name of Frank cursed him into this form out of jealousy. Tim begs Amaz-O to help turn his sister back to normal, but he says there's nothing he can do, as the magic will wear off by itself. Amaz-O proceeds to insult Tim further until Tim snaps and calls him out on his rude behavior. Amaz-O apologizes and offers Tim a chance to be in his act.

Tim happily agrees, and he is transformed into Amaz-O's new assistant: a white rabbit named Fluffy.

Bad Hare Day was adapted into an episode of the Goosebumps TV series. It is the fourth episode of season two, and the twenty-third episode overall. 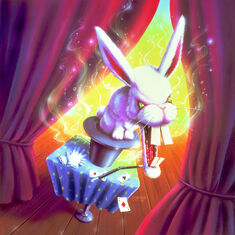 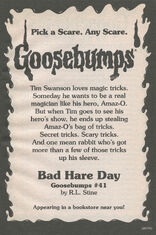 Book advertisement from Night of the Living Dummy III.

Trading card found in #40 Night of the Living Dummy III. 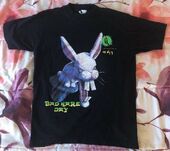 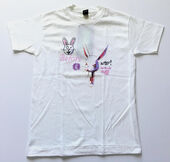 Before and After T-shirt.

Before and After T-shirt detail. 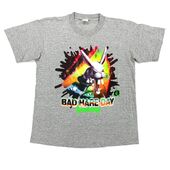 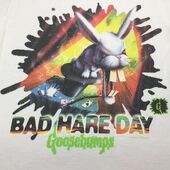 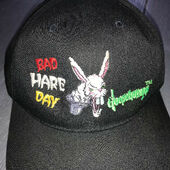