"Awesome Ants" is the fifteenth episode of season three of the Goosebumps TV series, and the fifty-ninth episode overall. It premiered on February 7, 1998 on Fox during the Fox Kids block.

Dave and Ben are ordering Ice Cream in a parlor with a few ants inside it. Ben then notices an ant on the Cherry in his sundae, which then makes Dave notice many more ants both of their ice-creams, which they toss aside in shock and horror. The Ice Cream server then runs out of the building, with the boys and the other customers quick to follow in fear of even more ants. An exterminator named Mr. Lantz soon arrives, saying he's here to deal with the infestation. Lantz excitedly begins telling the boys various facts about ants, finishing by claiming that "If things had been a little bit different, they'd be the dominant species, instead of us." He smashes part of the wall with a hammer and retrieves the queen ant from inside, explaining that if you eliminate the queen you destroy the nest, before crushing the queen ant in his hand. Lantz tells Dave that in a town as infested as this one, he should learn a few things about ants, convincing him to order some "Awesome Ants" from an advert on the back of his comic book. Remembering that he still needed a science project, Dave decides to order them.

The next morning, Dave's ants arrive. After signing the box, the delivery man asks Dave where he wants the "other" box. The other box, containing the ant habitat, turns out to be as tall, long and wide as the men delivering it, despite the order costing a mere five dollars. The massive ant habitat is installed outside. Ben finds the instruction manual, which Dave initially refuses to read due to it being the size of a phone book. There is also a jar of food pellets, with clear instructions to not feed the ants more than one per day.

Dave places the ants into their new habitat before he and Ben head to school. Later, Dave begins filming the ant hive with a camcorder. Ben arrives just before Dave plans on feeding the ants. The single food pellet is quickly devoured by a swarm of just a few ants. Ben claims that the ants would probably appreciate some "real" food. Dave is reluctant, telling him the ants should only be one pellet and only once per day but Ben dismisses this as a misprint, questioning how they can possibly survive on one pellet per day. Ben then proceeds to place a live worm in the ant habitat, which is also quickly devoured. Then also feet them some hot dogs.

Later that night, Dave inspects the manual more closely, this time noticing that it says overfeeding may lead to rapid growth. As Dave wonders whether or not he was wrong to feed them so much, someone is shown creeping into Dave's room. It turns out to be Dave's mother, here to offer him a freshly baked cookie - but before he can take one, he realizes that the cookie tray is covered with ants, which his mother doesn't seem to notice. Down in the ant habitat, an ant is growing bigger.

The next morning, Dave's mother screams as she finds ants all over the kitchen. As she tries to clean the ants away, Dave calmly explains that the ants will return to the nest when they are done foraging. As Dave heads out to go to school, he notices that the lock on the ant habitat has mysteriously broken, and he places a cinderblock on the lid to prevent it from being opened. Later at school, Dave shows his class all the footage he recorded while giving a report on ants. Lantz enters the room just as class finishes and accuses Dave of faking the footage, claiming that the largest species of ant only grows up to two inches long, whereas the ants Dave recorded were at least three inches long.Lantz declares that if they were real "we wouldn't be around for very long".

Upon returning home, Dave finds the cinderblock has been split in two, the ant habitat is open once more, and the bones of some animal are lying inside. Dave quickly realizes that the bones belonged to the turkey his mother had been planning on making for dinner. Later that night, Dave tries to lock the ant habitat more securely before calling the Awesome Ants company. A woman from the company tries to explain to Dave how much danger he is in, but the call is suddenly disconnected. Dave follows the phone cord to see if it has been damaged, only to notice that an ant the size of a hamster has the line in its mouth. Dave runs outside, still yelling for his family, but he receives no response of any sort.

He then runs off until he reaches Lantz' office, but finds no signs of him. A door opens behind Dave, only for a massive pair of antennae to begin sticking out of it. Dave immediately forces the door closed, severing the antennae from their host. Two more ants appear to attack him. As Dave searches the room for a way out, an ant the size of a van crawls through a door and grabs Dave. Dave continues screaming for help and for Mr. Lantz, before waking up in his bed, discovering that everything was all a dream.

Confused, Dave goes downstairs and pours himself some cereal - but instead of cereal coming onto his plate, the container is full of blue ant pellets. Andrea and Dave's mother immediately chastise him for pouring so much food out. Shocked, Dave heads to the fridge and notices that it contains nothing but blue pellets. A beeping noise is then heard outside, to which Andrea immediately declares she will get the shovel, while Dave's mom tells him to get some buckets.

Andrea and Dave's mother run outside, while Dave walks, looking all around. All over the street are massive piles of blue pellets, with people shoveling them into buckets and bringing them inside. Dave realizes the entire neighborhood is in a giant glass case, with ants the size of mountains watching over it. Lantz approaches him and says that he knows Dave is thinking about how "If things had been maybe just a little different, we'd be the dominant species, instead of them". Dave begins telling him about the bizarre dream he had, and how it seemed so real he started to believe it. 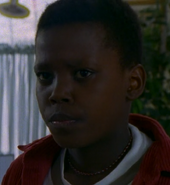 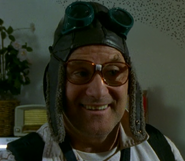 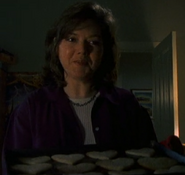 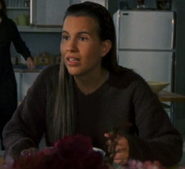 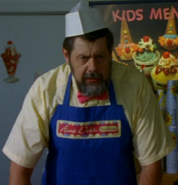