Bride of the Living Dummy
Attack of the Jack-O'-Lanterns is the forty-eighth book in the original Goosebumps book series. It was first published in 1996.

The original cover illustration depicts five Pumpkin Heads and a pumpkin-headed dog walking down a street in Riverdale.

Nothing beats Halloween. It's Drew Brockman's favorite holiday. And this year will be awesome. Much better than last year. Or the year Lee and Tabby played that joke. A nasty practical joke on Drew and her best friend, Walker. Yes, this year Drew and Walker have a plan. A plan for revenge. It involves two scary pumpkin heads. But something's gone wrong. Way wrong. Because the pumpkin heads are a little too scary. A little too real. With strange hissing voices. And flames shooting out of their faces...

Drew Brockman absolutely loves Halloween. Unfortunately, her last two Halloween's have been ruined by two kids named Tabitha Weiss and Lee Winston. Two years ago, Drew and her friends Walker, Shane, and Shana, were targets of a mean prank where Tabitha and Lee staged a fake break-in at Lee's Halloween party. The year after, Drew planned a scary Halloween party, only to learn that Tabby and Lee were spending Halloween at Lee's cousin's. What's worse, the fake slime that Shana had intended to use at the party burned a hole through Drew's couch.

Drew and her friends decide to plan the ultimate prank to scare Tabitha and Lee straight. On Halloween, Shane and Shana tell Drew and Walker to invite Tabitha and Lee to go trick-or-treating with them, and the two will meet the other four later on for the prank. When Halloween comes, Drew's mother is reluctant to let Drew go out due to the disappearance of four adults at a nearby town. Luckily, Drew's father argues that Drew can go out as long as she stays with a group.

As Drew, Walker, Tabitha, and Lee head out, they run into two people dressed in costumes with Pumpkin Heads. Tabitha and Lee are convinced that the two are Shane and Shana. The two pumpkin-headed people take the kids to a street that the kids are sure was never there before, saying they will get lots and lots of candy from the incredibly generous inhabitants. But when it starts to get late, Drew and the others learn that the two pumpkin headed kids will not let them go home, and want them to trick-or-treat forever. Tabitha and Lee are still not scared, so they try to take the jack-o'-lanterns off the two, but when they do, they find that there is no head beneath them and that the jack-o’-lanterns are still talking.

At this point, the two Pumpkin Heads reveal that they are Shane and Shana, and that the entire ordeal was merely the prank that the four had created to scare Tabitha and Lee away. It turns out that Shane and Shana are actually aliens with the strange abilities to disguise themselves as any person and mimicking their voices, and the other Pumpkin Heads in the neighborhood were their brothers and sisters. As they arrive at the driveway of Drew's house, Drew asks Shane and Shana what do they eat for she never saw them eat. The two tell her that their people eat human flesh but that she needn't worry yet, she's not an adult yet, nor is she plump enough. Drew asks them if they're joking, but she doesn't get an answer.

Attack of the Jack-O'-Lanterns was adapted into an episode of the Goosebumps TV series. It is the tenth episode of season two, and the twenty-ninth episode overall. 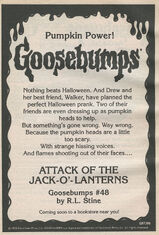 Book advertisement from Legend of the Lost Legend. 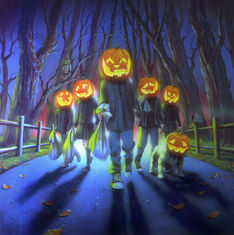 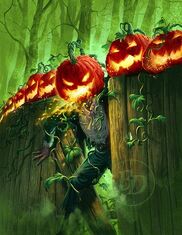 The original printings of the book included bookmark trading card tear-outs. Some printings also included metallic stickers. The first sticker is a modified version of the cover. The Pumpkin Heads' designs have been changed to look more sinister, and the dog and owl were removed. The second sticker features the cover artwork from Monster Edition #1.

While it's never been made clear where the finalized alternate cover art came from, the original cover mockups and an early pencil sketch almost matches the sticker art exactly.[1] 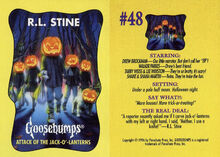