Dead but not buried...

Please Don't Feed the Vampire!
Attack of the Graveyard Ghouls is the eleventh book in the Goosebumps Series 2000 book series. It was first published in 1998 and received a Classic Goosebumps reprint in 2015, as a tie-in to the film Goosebumps.

The original cover illustration shows the Graveyard Ghouls emerging from a graveyard.

Spencer Kassimir lives in Highgrave, a town with a graveyard that sits high on a hill that overlooks the town. An old legend states that the dead in the graveyard can't rest because the graveyard is too high, and they have become restless angry Graveyard Ghouls. Spencer is giving a report at school on the town, which inspires his teacher Mrs. Webster to go on a field trip to the graveyard. Spencer and his best friend Audra Rusinas spot the double tombstone of brothers Oswald Manse and Martin Manse, and find it sad that they died so young.

Spencer stumbles on their tombstone, and think he hears a small cry. He goes home but discovers that he left his brother Jason's backpack in the graveyard. He calls Audra and has her come with him to get it, so he isn't alone. They go back but find bullies Frank Foreman and Buddy Tanner waiting for them, as they called Audra after Spencer did and she told them where they were going. They tie Spencer to the double tombstone and run away, as Audra leaves to get help.

Spencer hears a voice asking for his body and he starts to feel pressure on his body. Soon, he finds himself being kicked out of his body and is now a spirit floating above it. His body has been taken over by a graveyard ghoul. Audra returns with Spencer's parents, who free him with the ghoul inside his body. Spencer tries to tell them to stop but they can't hear or see him, and he can only go as far as the wind can take him.

Some graveyard ghouls appear and tell Spencer he's a ghoul now too. He'll never get his body back because the ghoul who stole him was Oswald Manse. In life, he and his brother burned down half the town and many people died. They say that there is a way for Spencer to get his body back, but he must figure out on his own. He sees a rat and decides he has to take over its body so he can get out of here. He does so and heads home, where he is attacked by his cat Duke.

He manages to take over Duke's body and after failing to talk to his parents, he goes to his room and sees that it has been torn up. He finds Oswald in his kitchen, making a mess. He tells Cat Spencer that his body is weak, so when he has found another, he will destroy Spencer's. Oswald traps Spencer in a box in the basement, but he takes over the body of a spider and slips through the cracks. He goes to Jason's room and takes over his body. He goes outside and sees that Oswald went on a rampage, burning mailboxes and smashing car windows.

Spencer follows Oswald into Frank's house, and stops him from taking over Frank's body. Oswald leaves and remembers Audra, and goes to her house to get help. But he discovers that Martin has taken over her body and the real Audra is back in the graveyard. Spencer goes back there and spots a message on a gravestone saying "Defeat death only by living" but doesn't know what it means. He find Audra's spirit and has her take over a dog. They go back into town and see Oswald and Martin burning houses in their bodies.

Before the kids can do anything, Spencer hears Jason's voice, who demands that Spencer give him his body back. Jason's attempt to take over his body causes his body to start making weird movements. It resembles a crazy dance, which makes the ghouls double over in pain. Spencer realizes the dance is doing this, and this is what that gravestone meant by defeating death only by living, as there is no better sign of being alive than dancing.

The ghouls' spirits leave the bodies, and Spencer and Audra attempt to get back in their bodies before the bodies can die. They seem to do so, but Spencer discovers his mind has accidentally entered into Audra's body, with Audra's now in his. Spencer (who is now in Audra’s body) says that they made a mistake, he then wonders what to do next. 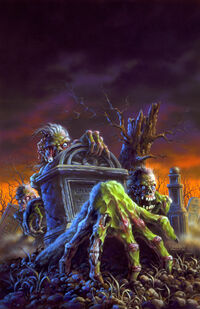 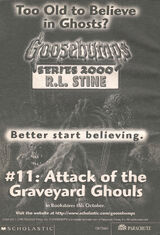 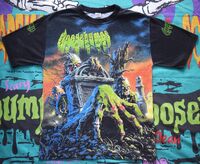 Retrieved from "https://goosebumps.fandom.com/wiki/Attack_of_the_Graveyard_Ghouls?oldid=152789"
Community content is available under CC-BY-SA unless otherwise noted.