Goosebumps Wiki
Register
Don't have an account?
Sign In
Advertisement
in: Books, Give Yourself Goosebumps, Animals,
and 8 more

Escape from Camp Run-For-Your-Life
Attack of the Beastly Babysitter is the eighteenth book in the Give Yourself Goosebumps gamebook series. It was published in 1997.

The cover illustration shows a huge rat in clothes, standing in front of a house and ringing the doorbell. On the right is a scared child peeking through window blinds.

Rats! You're too old for a baby-sitter. But your mom hired one anyway. And that's the good news. The bad news is the baby-sitter works for a company called KidScare.

So what do you do? If you like to play games, meet Dare. He knows some killer games — but if you lose, you'll never go home again. Forget about playing nice!

Or maybe you'd rather go to the Fun Zone. Look out! Will you drown in the Bottomless Ball Pit? Will you find your way out of the Tomb of the Unknown Rat? Just one bit of advice: Whatever you do, don't eat any of that stuff marked "Switch Cheese"!

Your mother has hired a babysitter named Zoe for you and your six-year-old brother, "Stinko". Zoe has whiskers, claw-like fingernails, and a pointy nose. Zoe provides you with a spinner. The spinner offers the choice between fun or games. Whatever it lands on determines which of the two main storylines you will follow. The spinner is reused for a couple of choices, and there are a few activities to do in the "Games" section with a tattooed man named Dare.

The spinner lands on FUN, and Zoe immediately takes you and Stinko to the "Fun zone". before you notice, Stinko is already wondering off, and from listening just for a bit to Zoe's conversation with one of the other babysitters, you quickly find out that the fun zone isn't exactly as fun as it seems. Now you must find Stinko and Escape from the fun zone, before Zoe forces you to help her produce one of the key ingredients she needs for her "Switch Cheese" - and that is grated kid...

The spinner lands on GAMES, causing Zoe to vanish. Now a heavy tattooed man called "Dare" is the one taking care of you. He tells you and Stinko that you must play (and win) all his games if you ever want to go home. If you lose, you will be forced to join KidScare, forever (although there is not a single ending in this Story in which something like that happens).

In story A, instead of looking for Stinko right away, you decide to keep snooping on Zoe. But you accidentally knock over a crate of Switch cheese, and Zoe spots you shortly after. You run for a door with a sign that reads "NO EXIT, EMPLOYEES ONLY", and eventually end up at the heart of the rat people's operation (Along with Stinko, who is now tied up to a lab table). Zoe informs you that you and Stinko were kidnapped because of your "genetic makeup", and that with your help, they might succeed in making the Switch cheese they need to become humans once again.

There are twenty one bad endings and three good endings. 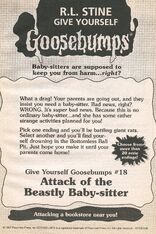 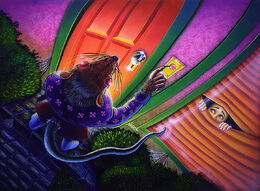